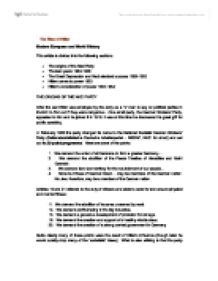 The Rise of Hitler Revision notes.

The Rise of Hitler Modern European and World History This article is divided into the following sections: * The origins of the Nazi Party * The lean years 1924-1929 * The Great Depression and Nazi electoral success 1929-1932 * Hitler comes to power 1933 * Hitler's consolidation of power 1933-1934 THE ORIGINS OF THE NAZI PARTY After the war Hitler was employed by the army as a 'V' man to spy on political parties in Munich to find out if they were dangerous. One small party, the German Workers' Party, appealed to him and he joined it in 1919. It was at this time he discovered his great gift for public speaking. In February 1920 the party changed its name to the National Socialist German Workers' Party (Nationalsozialistische Deutsche Arbeiterpartei - NSDAP, NAZI for short) and set out its 25-point programme. Here are some of the points: 1. We demand the union of all Germans to form a greater Germany... 2. We demand the abolition of the Peace Treaties of Versailles and Saint Germain. 3. We demand land and territory for the nourishment of our people... 4. None but those of German blood... may be members of the German nation. No Jew, therefore, may be a member of the German nation. Articles 10 and 21 referred to the duty of citizens and state to work for and ensure physical and mental fitness: 11. We demand the abolition of incomes unearned by work. 14. We demand profit-sharing in the big industries. 15. We demand a generous development of provision for old age. ...read more.

14.8 (15.1) The Communist Party 77 (54) 14.3 (10.6) 1928 figures in brackets. The Centre includes the Bavarian Peoples' Party This was a remarkable achievement (Hitler had only expected about 50 seats) but who turned to the Nazis and why? Reasons for Nazi Success Recent research into Nazi voting patterns suggests that after 1928 the party performed best in predominantly Protestant and rural districts of Northern Germany. However, despite the disproportionate number of Protestant, rural and middle-class supporters, the Nazis could justifiably claim to represent a wider range of economic and social groups than any other party - appealing to the young in general and even some working class voters and Catholics. Many people voted Nazi simply because they agreed with their ideas. If you look back to the 25 point programme, it is clear that the party had something for everyone - young and old, working class, middle class, employed, unemployed. And for anyone wondering who was to blame for Germany's problems the Nazis pointed to the 'November criminals' and to Jews as the culprits. To Nationalists who wished to restore German pride Hitler's commitment to overthrow the hated treaty of Versailles struck a chord. Indeed Hitler was able to mobilise disaffection much more successfully then the traditional parties because they had been too closely associated with the failing Weimar Republic. In addition we should not underestimate the importance of the methods the Nazi Party employed - its parades, its symbols, the uniforms and banners, the bands, the marching columns of SA, the rallies, Hitler's rhetoric - all these captured the imagination of the masses. ...read more.

On May 2nd he closed down trade unions, took away their funds and put their leaders in prison. Then on 14th July he passed the Law against the Formation of New Parties which in effect turned Germany into a one-party state. Hitler officially called an end to the 'revolution' in July 1933, but the SA continued to act in an unrestrained way. Ernst R�hm, their leader, wanted his brown shirts to be merged with the army and himself made a general. The army disapproved of the SA and since it was the one organization that could have removed Hitler, he came up with a typically ruthless solution. On 30th June 1934 R�hm and most of the SA leaders were murdered by the SS in what became known as the Night of the Long Knives. The army was impressed by Hitler's decisive handling of this problem and when, one month later, President Hindenburg died, the Reichswehr (army) agreed that Hitler should become President and Chancellor, and took an oath of allegiance to him. On 2nd August 1934 Hitler became 'Fuehrer and Reich Chancellor' and the men of the army swore the following oath: I will render unconditional Obedience to the fuehrer of the German Reich and people, Adolf Hitler, the supreme commander of the armed forces, and will be ready as a brave soldier to stake my life at any time for this oath. Hitler had easily outmanoeuvred the Weimar politicians who had fatally underestimated him. In the space of eighteen months he had abolished the democracy, made himself dictator and gained a measure of control over the army. The path was now clear for him to carry out those aims he had expressed just ten years before in his book, Mein Kampf. ...read more.