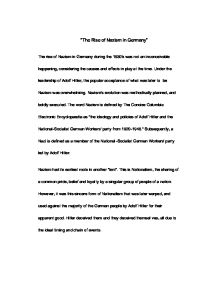 &quot;The Rise of Nazism in Germany&quot;.

"The Rise of Nazism in Germany" The rise of Nazism in Germany during the 1930's was not an inconceivable happening, considering the causes and effects in play at the time. Under the leadership of Adolf Hitler, the popular acceptance of what was later to be Nazism was overwhelming. Nazism's evolution was methodically planned, and boldly executed. The word Nazism is defined by The Concise Columbia Electronic Encyclopaedia as "the ideology and policies of Adolf Hitler and the National-Socialist German Workers' party from 1920-1945." Subsequently, a Nazi is defined as a member of the National-Socialist German Workers' party led by Adolf Hitler. Nazism had its earliest roots in another "ism". This is Nationalism, the sharing of a common pride, belief and loyalty by a singular group of people of a nation. However, it was this sincere form of Nationalism that was later warped, and used against the majority of the German people by Adolf Hitler for their apparent good. Hitler deceived them and they deceived themselves, all due to the ideal timing and chain of events. Prior to and during World War One, Germany was a powerful nation with colonial interests in Africa and Alsace-Lorraine. ...read more.

The psyche of the people further worsened beginning in 1922 due to the French, who had invaded Germany because the country failed to make its second reparation payment. The French took over the most industrialized area, the Ruhr Valley, where they assumed possession of coalmines, railways and factories. To add to the fact that the German country was losing their largest source of wealth to another country that stole the area, prices were quickly rising as an effect. The price of a loaf of bread rose from half a mark in 1918 to 201,000 million marks in 1923. The Germans were unable to feed themselves and their families because of this hyperinflation. This caused more deaths and suffering among the people and further disappointed them. In 1923, Hitler made his first attempt to overthrow the German government. He was supported by many and began a Putsch, an attempt to seize power by force, in Munich. The government had Hitler arrested for treason and sentenced to five years in prison. Although he served only nine months of his sentence, he had enough time to gather his thoughts and organize the plan he would need in order to rise to power over German people. ...read more.

This is when Hitler truly became a dictator. Hitler's rise to power can be accounted for by his luck of appearing at a time when the people of his country were discouraged and desperate, and his twisted, determined drive. Hitler took advantage of the times and without them being what they were, he would have never became a dictator. He united the German people by assigning to them a common foe, and a goal, to rid themselves of this foe. He allowed for his people somebody to blame and resent, which took the hatred away from its original destination, the German government. The death of a generation of men, the loss of a war, the harsh terms of the Treaty of Versailles, mounting inflation, the worldwide economic crisis, the lack of faith in the past government and Hitler's deceiving promises are the causes of his rise to power. He was a frightfully determined man who managed to leave Germany in a state worse than it was when he promised to improve it, without ever losing the faith of his followers. The Nazi party, led by Adolf Hitler had dreams of a thousand year Reich. Thankfully, Nazism lasted only twenty-five years. At the end of World War 2, the Nazi party was outlawed. ...read more.