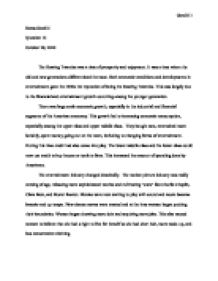 The Roaring Twenties was a time of prosperity and enjoyment. It was a time where the old and new generations differentiated the most.

Roma Gandhi Question 12 October 28, 2010 The Roaring Twenties was a time of prosperity and enjoyment. It was a time where the old and new generations differentiated the most. Both economic conditions and developments in entertainment gave the 1920s the reputation of being the Roaring Twenties. This was largely due to the financial and entertainment growth occurring among the younger generation. There was large scale economic growth, especially in the industrial and financial segments of the American economy. This growth led to increasing economic consumption, especially among the upper class and upper middle class. ...read more.

The motion picture industry was really coming of age, releasing more sophisticated movies and cultivating "stars" like Charlie Chaplin, Clara Bow, and Buster Keaton. Movies were now starting to play with sound and music became brassier and up tempo. New dances moves were created and at the time women began pushing their boundaries. Women began showing more skin and acquiring more jobs. This also caused women to believe that she had a right to live for herself so she had short hair, more make-up, and less conservative clothing. ...read more.

Americans would be completely drunk and at the speakeasies a lot of women were there. All the class separations and responsibilities were thrown away at the speakeasies which gave people the ability to enjoy themselves. Taken together, one gets the image of a glamorous party. People arriving at someone's estate in their shiny cars, dancing the Charleston while wearing the latest fashion, eating elaborate food. If one imagines hard enough, one can see the numbers of staff who were working during these affairs rather than enjoying them. And from this one can understand that while most people have a glamorous image of the Roaring Twenties, in some ways our image really only applied to the wealthy. ?? ?? ?? ?? Gandhi 1 ...read more.