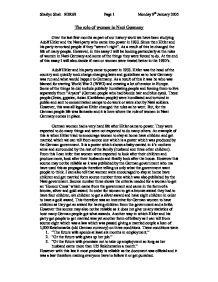 The role of women in Nazi Germany

The role of women in Nazi Germany Over the last few months as part of our history work we have been studying Adolf Hitler and the Nazi party who came into power in 1933. Since then Hitler and his party terrorised people if they "weren't right". As a result of this he changed the life of many people. However, in this essay I will be looking particularly at the roles of women in Nazi Germany and some of the things they were forced to do. At the end of this essay I will also decide if men or women were treated better in the 1930's. Adolf Hitler and his party came to power in 1933. Hitler was the head of the country and quickly took charge changing laws and guidelines as to how Germany was run and what would happen to Germany. As a result of this it was he who was blamed for starting World War 2 (WW2) and creating a lot of tension in Europe. ...read more.

Source number three shows the criteria needed for a woman to get an 'Honour Cross' which came from the government and came in the form of a bronze, silver and gold award. In order for women to get a bronze award they had to have four children, six children to get a silver award and have eight children in order to have a gold award. This therefore was an incentive for German women to have children as they got an award for having children from the government and a bribe. However this source may also not be reliable as it does not give us any statistics of how many German people got what awards. Another way in which Hitler and his party got people to get married was yet another form of bribery as I can tell from source eight which was a law which was passed giving a married couple a loan of 1,000 Reichsmarks (old German currency) on three conditions. ...read more.

However it is not a reliable document as it was written by the "League of German Maidens" who may have viewed life for normal women different to theirs. However we can infer from this source what was expected of German women in society and the strict rules and procedures they were expected to follow. Another thing which women were expected to do was go give up their jobs or slowly forced to leave their jobs and do domestic chores as seen in source four. Source for was written by civil servants in the German government and exclaims that in the event of a man and woman going for the same job the man will always get preference to the woman, no matter if the woman has more qualifications than the man. From this I can tell that women were given second-preference to men which was a form of prejudice. I can also tell from this source that men were more superior to women. I also think that this source is reliable as it is official guidelines therefore making it true and reliable. ?? ?? ?? ?? Shailyn Shah 9DR/9I Page 1 Monday 9th January 2005 ...read more.