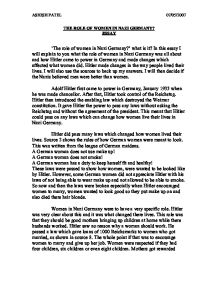 THE ROLE OF WOMEN IN NAZI GERMANY?

THE ROLE OF WOMEN IN NAZI GERMANY? ESSAY 'The role of women in Nazi Germany?' what is it? In this essay I will explain to you what the role of women in Nazi Germany was all about and how Hitler came to power in Germany and made changes which affected what women did. Hitler made changes in the way people lived their lives. I will also use the sources to back up my answers. I will then decide if the Nazis believed men were better than women. Adolf Hitler first came to power in Germany, January 1933 when he was made chancellor. After that, Hitler took control of the Reichstag. Hitler then introduced the enabling law which destroyed the Weimar constitution. It gave Hitler the power to pass any laws without asking the Reichstag and without the agreement of the president. This meant that Hitler could pass on any laws which can change how women live their lives in Nazi Germany. Hitler did pass many laws which changed how women lived their lives. ...read more.

Mother craft classes that helped mothers cope with children and taught how to look after there children were introduced. Homes for unmarried mothers were set up to allow unmarried women to become pregnant often by a 'racially pure' member of the SS. Despite Hitler all of a sudden wanting women to produce babies but he does not explain why? I think the reason behind this is that Hitler probably wanted Germany to be racially pure (Aryan) populated place so that other countries would respect the Germans and not the Jews, gypsies and many more. German women had to stay home and look after the children as the men worked. Source 5 clearly shows a German rhyme for women. 'Take hold of kettle, broom and pan' that line means to say that a German woman should cook and clean. 'Then you'll surely get a man!' that means if you do cook and clean you'll surely get a man. ...read more.

no German woman had a job and only had to clean the house and stuff but the men worked and earned money. On the other hand I think that men were not better than women because it was the men that made all the women stop and leave their jobs to looking after children and cleaning up. Even when the women were equally qualified they would not allow them to be employed. However, it was difficult to make a decision because the sources focused on the changes the Nazis made to women's lives but not what the women felt about them. But looking at sources and information gathered from libraries and the internet I think you can make out what German women really felt. They felt unworthy one reason because they were told to leave there jobs. One of the problems I had making this decisions was that there was many sources to look at. I think women in Nazi Germany did not have many rights. ?? ?? ?? ?? ASHISH PATEL 07/05/2007 ...read more.