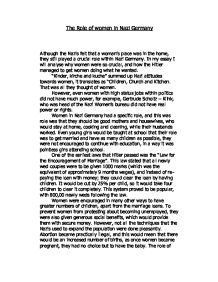 The Role of women in Nazi Germany.

The Role of women in Nazi Germany Although the Nazis felt that a woman's place was in the home, they still played a crucial role within Nazi Germany. In my essay I will analyse why women were so crucial, and how the Hitler managed to get women doing what he wanted. "Kinder, kirche and kuche" summed up Nazi attitudes towards women, it translates as "Children, Church and Kitchen. That was all they thought of women. However, even women with high status jobs within politics did not have much power, for example, Gertrude Scholtz - Klink, who was head of the Nazi Women's bureau did not have real power or rights. Women in Nazi Germany had a specific role, and this was role was that they should be good mothers and housewives, who would stay at home, cooking and cleaning, while their husbands worked. Even young girls would be taught at school that their role was to get married and have as many children as possible, they were not encouraged to continue with education, in a way it was pointless girls attending school. ...read more.

The role of women in Nazi Germany was largely to produce a big amount of children. Every year, on the 12th of August, women were awarded the "Motherhood Cross". The most productive mothers were awarded medals. Eight children would give you a gold medal, producing six children was for silver, and bronze was awarded to mothers who had raised four children. In appearance, the Nazis wanted women to dress sensibly, and unfashionably. Women were not expected to wear make-up or trousers, and only to wear flat, low-heeled sensible shoes. But it didn't stop at clothes, the dyeing of hair and perms were not allowed. The Nazis preferred their women to be well built rather than slim. Women were told that slim women would have problems in their pregnancy. They were discouraged from doing things that could possibly harm their chances of having children. By coincidence, one of these "dangerous things" for a woman to do was to work. If they really had to work, then they would not be allowed to be doctors or lawyers, but were told to stick to "natural" occupations, reflecting their "natural" talents, such as nursing. ...read more.

Joseph Goebbels sounds like a hypocrite to me, because he is saying that the role of women was to be beautiful, but women in Nazi Germany weren't allowed to be beautiful, they weren't expected to have interests in fashion or make up, or slimming. The role of women in Nazi Germany was to not only have children, but to bring them up to believe that Hitler was the greatest, and that Jews in particular had lower status. Children would be brought up in a sexist environment, in my opinion. From a very early age, boys and girls didn't mix at the different Hitler groups for the youth, for example "the little fellows" and "young maidens". Mothers would also be expected to teach their children what would be expected from them later on in life, depending on their sex. So, unlike a man's role, which was that of a provider and a defender, a woman's role was to be a good housewife, and to stay at home cooking and cleaning, and to bring up as many pure German children as possible. Hayley Hassan 10 03 ...read more.