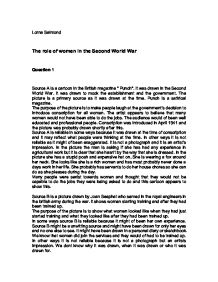 the role of women in the second world war.

Lorna Salmond The role of women in the Second World War Question 1 Source A is a cartoon in the British magazine " Punch". It was drawn in the Second World War. It was drawn to mock the establishment and the government. The picture is a primary source as it was drawn at the time. Punch is a satirical magazine. The purpose of the picture is to make people laugh at the government's decision to introduce conscription for all women. The artist appears to believe that many women would not have been able to do the jobs. The audience would of been well educated and professional people. Conscription was introduced in April 1941 and the picture was probably drawn shortly after this. Source A is reliable in some ways because it was drawn at the time of conscription and it may reflect what people were thinking at the time. In other ways it is not reliable as it might of been exaggerated. It is not a photograph and it is an artist's impression. ...read more.

Question 2 Source D is a letter written by a women, who is a new Land Army recruit. The letter has been written to her boyfriend. It was written during WW2. We don't know exactly when but it must have been written after April 1941, as this is when conscription of women was introduced. The source is an unwitting source. It was written to tell her boyfriend about her first day, and it was not written to be published. The content of the source is useful because it tells us what time they got up and had breakfast, what work they did during the day, what time they finished work, where they slept and what they slept on and what the weather was like. There are some gaps that make it less useful. It does not explain what time they went to bed, what they got they paid each month, where they went to pick potatoes, who their general was and where they were based. Aspects of the provenance of the source make it reliable. ...read more.

There are aspects of the provenance of the source make it reliable. We know that women did volunteer to sign up to join the Land Army, and because women were most likely to be found in a shopping centre, it would of been easier to get them to sign up there. However, aspects of the source make it unreliable. We don't know why the photo was taken, who it was taken for and we don't know who took it. It could of been taken to be used for propaganda purposes, It could of been taken by a family member just for fun, although to me it looks posed because the women are smiling. I think that source D is more useful because it is a unwitting source as it was only meant to be seen by her boyfriend and she was telling him of her experience. It tells us about the lives of women in the Land Army and what conditions they worked and lived in. Source D is a letter and it was written at the time and although the photograph (source C) was taken at the time it, doesn't tell us anything about the lives of the women in the Land Army. ...read more.