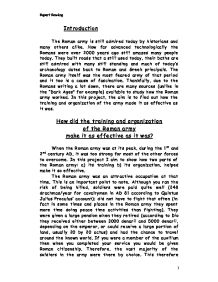 Introduction The Roman army is still admired today by historians and many others alike. How far advanced technologically the Romans were over 2000 years ago still amazes many people today. They built roads that a still used today, their baths are still admired with many still standing and much of today's archaeology dates back to Roman and Greek principals. The Roman army itself was the most feared army of that period and it too is a cause of fascination. Thankfully, due to the Romans writing a lot down, there are many sources (unlike in the "Dark Ages" for example) available to study how the Roman army worked. In this project, the aim is to find out how the training and organization of the army made it as effective as it was. How did the training and organization of the Roman army make it as effective as it was? When the Roman army was at its peak, during the 1st and 2nd century AD, it was too strong for most of the other forces to overcome. In this project I aim to show how two parts of the Roman army: a) its training b) its organization, helped make it so effective. The Roman army was an attractive occupation at that time. This is an important point to note. ...read more.

Josephus, A History of the Jewish War No other force in the world at that time trained as hard as the Romans did. They trained as though they were in a battle, so that when they did come to an actual battle they would be fitter than their opponents and would know exactly what their specific task was and how they should do their task. They therefore had an advantage over their enemy before the battle had even begun. This shows that the organization of the Roman army made it more effective. Discipline was also paramount to the success of the Roman army. The rules were strict and anyone found to be disobeying the rules was dealt with severely: "The soldier who deserts to the enemy but then returns shall be tortured and condemned to wild animals or to the rack." "The soldier who in battle does something prohibited by his commanding officer or does not obey orders is executed even if his actions are successful." Both extracts from Modestinus, The Digest of Laws This strict method of discipline ensured that very few soldiers would step out of line; in fact there are hardly any recorded mutinies. They would be very obedient to their commanding officer and disciplined. ...read more.

These legions were divided into ten cohorts. A cohort was made up of six centuries. A century was the size of ten contubernia. Finally, one contubernium was made up of eight or ten men, this figure varies depending on the size of the army under different emperors. All twenty-five of the legions were numbered and given names that related to something important or of significance for that legion. Vegetius, when describing the Roman army of the 4th century AD, simplifies why the Roman army was better than anyone they came up against, explaining that the reasons the Romans won were due to their training, discipline and practice in war: "We see that the Roman people have subjugated the whole world by no means other than thorough training in the use of weapons, strict discipline in the military camps, and practice in warfare." Vegetius, A Book About Military Affairs Overall, the Roman army was stronger than anybody else at that time, in all the crucial departments. They trained harder, they were more disciplined, were better prepared for warfare and the soldiers were more contented overall. The fascinating point to note about it all is that in between all the battles, they built towns and buildings that still stand today and are marvelled at by the people of today. ...read more.