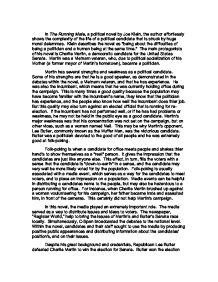 The Running Mate, a political novel by Joe Klein.

In The Running Mate, a political novel by Joe Klein, the author effortlessly shows the complexity of the life of a political candidate that is struck by huge moral delemmas. Klein describes the novel as "being about the difficulties of being a politician and a human being at the same time." The main protagonists of his novel is Charlie Martin, a democratic candidate for the United States Senate. Martin was a Vietnam veteran, who, due to political socialization of his Mother (a former mayor of Martin's hometown), became a politician. Martin has several strengths and weakness as a political candidate. Some of his strengths are that he is a good speaker, as demonstrated in the debates within the novel, a Vietnam veteran, and that he has experience. He was also the incumbent, which means that he was currently holding office during the campaign. This is many times a good quality because the population may have become familiar with the incumbent's name, they know that the politician has experience, and the people also know how well the incumbent does thier job. ...read more.

This certainly did not help Martin's campaign. In this novel, the media played an extremely important role. The media served as a way to distribute issues and ideas to voters. The newspaper, "Register World," help to bring the issues of Martin's and Butler's Senate race locally. Simultaneously, C-Span broadcasted the debates to the national level. Within the novel, candidates and their staff sought to use the media by producing positive public appearances and distributing information about the candidates' position's, and on their issues. Despite his great background and credentials, Republican Lee Butler defeated Charlie Martin to win the election for Senate. Butler won the election because of a few reasons. First, he is a newcomer to the political scene. He started off unknown by the public and was easy to confide in. Butler was also a very popular man, whose Muffler Man business was well-known and respected for quality service. ...read more.

The Political Action Committee provides funding in the form of hard money to any political candidate or candidates that they choose, and in return, the (hopefully victorious) candidate will take time to listen to what the PAC's interest group's needs are. This relationship is very benificial to all parties involved. The candidate gains the funding that is required to run a successful campaign, and the interest groups may very well get access to some winning decision makers, who create and sign policies that ______the interest group. The centerpiece of the novel most likely defines the running mate. This person is Nell. Nell is the centerpiece because everything that Charlie Martin does relates to, or correlates to her. One of Martin's advisers believed that the success of the campaign was dependent on Nell. So when Nell left after the first debate, the campaign left with her. Politics is defined as "Who gets what, when, where, and how." Morality is defined as "A system of ideas of right and wrong conduct." As you can see, there is no relationship between these two ideas. ...read more.