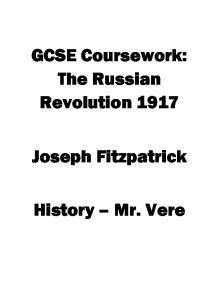 GCSE Coursework: The Russian Revolution 1917 Joseph Fitzpatrick History - Mr. Vere a) Explain Rasputin's Contribution to the collapse of Tsarism It has been argued by many historians that Grigori Rasputin played a vital role in the fall from power of the Tsar and his family, and therefore also played an important role in the complete collapse of Tsarism in Russia, and the later rise of communism. He had a lot of involvement with the Russian royal family, and it is often disputed whether or not he wanted the Russian government to fall, and also whether or not the role he played in the fall was all-important. Although there is significant evidence which portrays Rasputin as an "evil" figure, causing destruction in his wake, most of the evidence suggests that in this situation he was actually quite innocent, guilty of nothing other than mildly extravagant debauchery. Rasputin came from a very religious, somewhat superstitious Siberian background. He was brought up in a way that assured he would believe in the divinity of the family of the Tsar. Furthermore, due to his dedicated belief in his religion, it is extremely unlikely that he would have done anything in order to purposefully damage the political structure of his native country. It can be argued that his illegitimate sexual behaviour proves his deceptiveness. However, most evidence shows us that Rasputin had a strange belief that through sin, one can become closer to God. If this is true, then it is improbable that he would have made any kind of endeavours to seize any power in Russia. ...read more.

come out lucky, the Bolshevik party would have been left in the shade, waiting for their opportunity to seize power - an opportunity which might not have come around again. They just happened to be fortunate enough that all of these parties were extremely weak and incapable of achieving such ends. The Cadets already had all the power they wanted, and were happy with it, so weren't in any particular hurry to make any major changes - much to the distaste of the general public. The Social Revolutionaries were too 1-dimensional. The only major policy that they had was for land reform, and the public wanted more. Also, the party was too diverse geographically. And finally, the Mensheviks didn't believe that Russia was ready for such changes yet, and therefore had no action to go through with. However, this factor, like the others, rely on the other 3 factors in a web of causation. It is arguable that the reason these parties were so weak was because none of them had a strong, risk-taking, intelligent leader like Lenin. Also, it is very possible that they failed due an overwhelming amount of bad luck. Finally, it is probable that the main weakness of each of these 3 parties was the fact that they were not as good at propaganda, and certainly did not have more popular policies, than the Bolshevik party. At the end of the day, it is very unlikely that the Bolsheviks would have managed to have taken power if any of these 4 factors were taken away, and was extremely unlikely that they would have done it so quickly, and retained power for so long. ...read more.