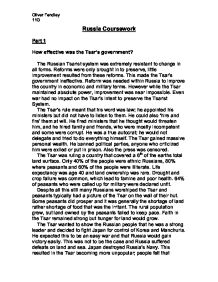 Russia Coursework Part 1 How effective was the Tsar's government? The Russian Tsarist system was extremely resistant to change in all forms. Reforms were only brought in to preserve, little improvement resulted from these reforms. This made the Tsar's government ineffective. Reform was needed within Russia to improve the country in economic and military terms. However while the Tsar maintained absolute power, improvement was near impossible. Even war had no impact on the Tsar's intent to preserve the Tsarist System. The Tsar's rule meant that his word was law; he appointed his ministers but did not have to listen to them. He could also 'hire and fire' them at will. He fired ministers that he thought would threaten him, and he hired family and friends, who were mostly incompetent and some were corrupt. He was a true autocrat; he would not delegate and tried to do everything himself. The Tsar gained massive personal wealth. He banned political parties, anyone who criticized him were exiled or put in prison. Also the press was censored. The Tsar was ruling a country that covered a 6th of the earths total land surface. ...read more.

The war did create a lot more jobs for people, but they were incredibly underpaid and were extremely overcrowded. The middle class had to set up their own organizations for getting supplies to the troops, like medical supplies. They were annoyed about this because the government should have been doing all of these things. The industrialists were not getting enough raw materials to fulfill their war contracts, because the government was not getting them to them. The Duma tried to get the Tsar to do something about these problems, but he did not listen and just dismissed them. The aristocracy was faced with losing their livelihoods because 13 million of the workers had been conscripted into the army, which meant they could not get any to work on their estates. Also many of them did not like the fact that Rasputin had a large influence over the government and the running of the country. Some other things that contributed to the Tsar's government becoming weak are that the Duma was always being dismissed instead of being listened to, to improve the country. ...read more.

The White army never rose above 250,000 men who were separated from each other by huge distances around the edges of Russia. Trotsky was seen as a genius, a great leader, a hard worker and a great orator. He was extremely popular among many of the Russian people. The whites had very little support from the Russian people, the peasants did not really like the Bolsheviks, but many preferred them to the Whites. The main reason for this was that the peasants knew that if the Whites won, landlords would return. Both sides, Red and White, had caused suffering for the peasants, but generally the whites had caused more. For example both sides would take grain from the peasants, but the Reds would usually leave enough for the peasants, whereas the Whites would take almost all of the grain. Politically the Whites played into the hands of the Bolsheviks because their slogan "A united and indivisible Russia" alienated national minorities. Also Denikan and Kolchak (White Leaders) were moderates who lacked effective political and economic programs. The whites also underestimated the Reds ability to resist. At times the White armies' most effective fighters (The Cossacks) were more interested in collecting personal wealth and securing local areas than focusing on the larger issue of driving Lenin from power. Oliver Fendley 11G ...read more.