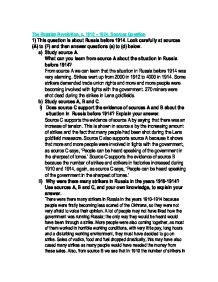 The Russian Revolution, c. 1910 - 1924, Sources Question 1) This question is about Russia before 1914. Look carefully at sources (A) to (F) and then answer questions (a) to (d) below. a) Study source A. What can you learn from source A about the situation in Russia before 1914? From source A we can learn that the situation in Russia before 1914 was very alarming. Strikes went up from 2000 in 1912 to 4000 in 1914. Some strikers demanded trade union rights and more and more people were becoming involved with fights with the government. 270 miners were shot dead during the strikes in Lena goldfields. b) Study sources A, B and C. i) Does source C support the evidence of sources A and B about the situation in Russia before 1914? Explain your answer. Source C supports the evidence of source A by saying that there was an increase of tension. This is shown in source a by the increasing amount of strikes and the fact that many people had been shot during the Lena goldfield massacre. Source C also supports source A because it shows that more and more people were involved in fights with the government, as source C says, 'People can be heard speaking of the government in the sharpest of tones.' ...read more.

Source D: Source D shows that the ordinary people of Russia supported the Tsar wherever he went, although the public may have been doing this so the Tsar and his people will not give them a hard time, it was dangerous for the public to express their true feelings. The support shown was only a small percentage of the population, it was emotional support. The country saw the monarchy as a religion, so they have always been told to worship it. Source D is a reliable source because firstly the writer is the Tsar's sister, she was an eyewitness. Secondly, she was writing in her private diary, there would be no reason for her to lie or exaggerate anything. Also, she would have written about these events a night (after they had happened) and so she may have only been picking out the good bits and forgetting the bad bits. Source E: Source E is useful in showing support for the Russian monarchy. It shows that faith in the government is decreasing and that a revolution is becoming more likely. The writer of this source, Alexander Guchkov was the leader of the Octobrists, a party basically loyal to the Tsar and his government. ...read more.

This is because as sources D and F shows that the ordinary people of Russia appeared supported the Tsar wherever he went, although I think that the public may have been doing this so the Tsar and his people will not give them a hard time, I believe that it was dangerous for the public to express their true feelings. Sources D and E also only a small percentage of the population of Russia, it cannot be mistaken for the majority of the Russian population. The Tsar also failed to face the peasants, poverty and workers. As the 3 categories were fitted by most of Russia's population, the Tsar was not very popular. The Tsar mainly supported the rich landowning class that was a very small percentage of the Russian population who did not need the Tsar very much. The people who needed the Tsar were the poor peasants with large hungry families (most of the Russian population), however the Tsar did not help them. This made a lot of people not to want to support the Tsar as he did not help the people in need. The Tsar was a autocratic ruler, this meant that he had complete and absolute power of Russia. A lot of people would not have liked this so the would not have really supported the Tsar. ...read more.