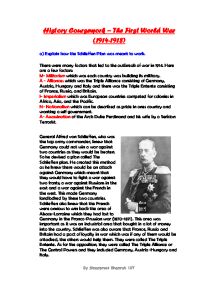 History Coursework - The First World War (1914-1918) a) Explain how the Schlieffen Plan was meant to work. There were many factors that led to the outbreak of war in 1914. Here are a few factors: M- Militarism which was each country was building its military. A - Alliances which was the Triple Alliance consisting of Germany, Austria, Hungary and Italy and there was the Triple Entente consisting of France, Russia, and Britain. I- Imperialism which was European countries competed for colonies in Africa, Asia, and the Pacific. N- Nationalism which can be described as pride in ones country and wanting a self government. A- Assassination of the Arch Duke Ferdinand and his wife by a Serbian Terrorist. General Alfred von Schlieffen, who was the top army commander, knew that Germany could not win a war against two countries as they would be beaten. So he devised a plan called The Schlieffen plan. He created this method as he knew there would be an attack against Germany which meant that they would have to fight a war against two fronts; a war against Russians in the east and a war against the French in the west. This made Germany landlocked by these two countries. ...read more.

One of the causes of the stalemate was the setting up of the trench system. This was a network of underground tunnels dug up by both the sides to conquer each others territory and to protect themselves from any attacks from the opposition. These trenches were created as Germany still occupied some parts of France and Belgium and that German soldiers be required to hold on to these parts at any costs. The proceeding British and French troops also began to dig trenches as they were to quickly understand that it was almost impossible to break these lines of trenches. It was difficult to break the trenches as they would be built in the shape of a zigzag and there would be at least three lines of trenches making it much harder to destroy. So if some one threw a bomb, it will only cause damage to a small area of the trench not the whole line. As I mentioned before there were about three lines of the trenches. You can see this in the diagram opposite. Every trench would be guarded by chains of barbed wire that was 30 metres deep. The first line was the front-line, followed by the second line which was called the support trench and finally the third line was the reserve trench. ...read more.

An example of a plane they would use is an Avro 540 which is shown above. It was created in 1915, and has only space for one person, the pilot. The plane allows you to store lots more fuel than the old model and is able to stay in the sky for quite a long time which would be helpful for spying on the enemy lines. As you can see there is no machine gun on this plane so it is obvious that this plane would have been used for spying missions. These planes were also used as 'spotters'. The job of the spotter was to see how precise there aim was and what needed to be improved to get their bullets to the right mark. This information would then be given to artillery. But this took too much time as the only form of communication with the artillery was to drop messages to them. It could sometimes take quite a while to spot for a small number of guns. On the whole, I think that technology was far more developed than tactics and this led to a lot of deaths and the continuation of stalemate. Also, in most cases the technology was still quite primitive and under-developed and failed to give either side any real advantage. ?? ?? ?? ?? By Simarpreet Bhamrah 10T ...read more.