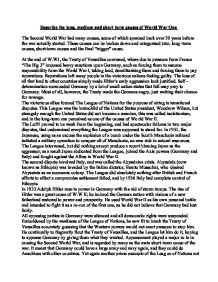 The Second World War had many causes, some of which spanned back over 20 years before the war actually started. These causes can be broken down and categorised into; long-term causes, short-term causes and the final &quot;trigger&quot; cause.

Describe the long, medium and short term causes of World War One The Second World War had many causes, some of which spanned back over 20 years before the war actually started. These causes can be broken down and categorised into; long-term causes, short-term causes and the final "trigger" cause. At the end of W.W1, the Treaty of Versailles convened, where due to pressure from France "The Big 3" imposed heavy sanctions upon Germany, such as forcing them to assume responsibility form the World War I, taking land, demilitarising them and forcing them to pay reparations. Reparations left many people in the victorious nations feeling guilty. The loss of all that land to other countries simply made Hitler's early aggression look justified. Self-determination surrounded Germany by a lot of small nation states that fell easy prey to Germany. Most of all, however, the Treaty made the Germans angry, just waiting their chance for revenge. The victorious allies formed The League of Nations for the purpose of airing international disputes. ...read more.

The League did absolutely nothing after British and French efforts to effect a compromise settlement failed, and by 1936 Italy had complete control of Ethiopia. In 1933 Adolph Hitler rose to power in Germany with the aid of storm troops. The rise of Hitler was a great cause of W.W II; he imbued the German nation with visions of a new fatherland restored to power and prosperity. He used World War II as his own personal battle and intended to fight it as a re-run of the first one, as he did not believe that Germany had lost fairly. All opposing parties in Germany were silenced and all democratic rights were suspended. Emboldened by the weakness of the League of Nations, he saw fit to break the Treaty of Versailles accurately guessing that the Western powers would not exert pressure to stop him. He continually to flagrantly flout the Treaty of Versailles, and the League let him do it, hoping to appease Germany by giving them what they wanted. ...read more.

The combined efforts of Britain, France, Japan, Russia, and the USA, would have succeeded marvellously in stemming the flow of a German uprising. An additional result of appeasement was the fact that, the League allowed Hitler to occupy the Sudetenland foolishly trusting him not to invade the rest of Czechoslovakia, which he did in 1939. As a direct result of this, feeling he could no longer trust Britain, Stalin made the surprising Nazi-Soviet pact which allied him with his sworn enemy; Germany. In the same year, Hitler forcibly annexed Austria (which was forbidden by the Treaty), and seized land from Lithuania. He began to make demands from Poland and was met with a staunch resistance, and it became clear to Hitler that he would have to attain his objectives by force. Then on the first of March 1939, Hitler "pressed the button" that started World War 2; he invaded Poland. Britain and France, who had pledged to support Poland in the event of aggression declared war on Germany two days later. World War II had begun. ...read more.