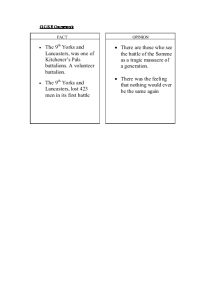 G.C.S.E Coursework 2) By February 1917, the lists of casualties and the news of the overall failure of the 1st day of the Somme had reached home. Despite this, the Generals still made an effort to cover it up. However many in the press, who had, months before, declared the Somme a titanic success, turned their backs on Britain's Military leaders. Cartoonists such as the one who created source B, tried to make their feelings heard. Source B is from a British magazine published in February 1917. This is three months after the Battle of the Somme ended. (November 1916) By now the news of its initial failure would have reached home. The artist has found his scapegoat in the generals, and he would be looking to discredit them, to convince the British public of the battle's failure. The Cartoon shows a "Major General" addressing the troops before a practise attack. The general and his staff have been made to look large and stubby. They look well fed and well kept. A sign that they haven't been to the front line. For this, the Germans called them donkeys, and called the British foot soldiers lions. "Lions led by donkeys" The soldiers around the parade ground however, are without faces. There could be two reasons for this. Firstly, the artist may not have wanted the mothers, brothers, wives etc to see their own sons in the shape of the drawn soldiers, and therefore the artist has meant not to cause hurt. However, secondly, and more probably, the artist has created the impression that the General sees men as numbers and not human lives. Yet these men are also those who kept small towns and villages such as Accrington together, and the general's plan of pals battalions only worked to an extent. If all these men were killed or wounded, what would happen to these close-nit communities back in the homeland? ...read more.

It is common knowledge that Rawlinson's battle plan relied solely on his five-day (ended up seven days, due to bad weather) bombardment of the German trenches. He put a lot of faith in it. "Nothing can exist in the area covered by it." However it is a fact that hundreds of the shells used in this bombardment were duds, either due to their age or quality. This meant that the bombardment on which so much rested, was less effective than was thought. (Hundreds of Germans survived) As Minister of Munitions, Lloyd George would have been in charge of selecting the shells for the bombardment, and many soldiers/civilians may have thought George the reason why the bombardment, and in some cases, the battle went so wrong. He could also have been a good scapegoat for such figures as Haig and other high ranking officers who looked to shift the blame for the failure of the first day of the battle on to another's shoulders. Lloyd George's memoirs may be his way of clearing the blame for the initial failure of the battle and with hindsight; he could use other methods of distracting the responsibility from him. Source H is an extract of a report send by General Haig in December of 1916 to the British cabinet about the effects of the battle of the Somme. By December 1916, the results of the battle of the Somme would have reached home. The British public would also know the casualty lists and the happenings of the 1st day. The British cabinet would also know these things. Therefore, Haig would be worried that his "employers" may sack him for these allegations of failure. In his report, he would be out to make the Battle of The Somme look like a success. In source G, Lloyd George says that the "great war...killed off" our best "officers and men." At the time his memoirs were published, Lloyd George was trying to fight for appeasement with Germany after they invaded Czechoslovakia. ...read more.

in August 1916, it describes the state of the German army on the Western Front (which Ludendorff took command of after the Somme.) Source 'I' is an extract from a book by Ludendorff, which was printed extremely quickly to stop the author from being blamed for the failure of the war. He talks of the British pushing the German lines back, where in fact the German's retreated by their own free-will to get into a more easily defended position. The "Hindenbourg Line." He says how his army was "completely exhausted." And this would help him with the German public, because it shows that even though the German army was near defeat, he, General Ludendorff managed to carry the war on for two more years. "When the Battle of the Somme began the Entente had a tremendous superiority, both on land and in the air. The Entente troops had worked their way further and further into the German lines. We had heavy losses in men and material. As a result of the Somme fighting we were completely exhausted on the Western Front. If the war lasted, our defeat seemed inevitable." If this extract is true, why on earth would the British army loose its zest and idealism? The weight of evidence in these sources shows that the British zest and idealism did perish on the Somme. However, to make a more valid decision, I would have liked: a key British eyewitness, newspapers from the time, the original battle plans, and photographs. Also, source F is one-sided and therefore I would also want the German casualty figures. With these sources, I could make a more valid judgement. However I still agree with Taylor's statement because, only seven and a half miles was gained at the deepest point in the line with huge casualties. The British only managed to push the Germans into a more defendable position in the Hindenburg Line, and the bombardment on which so much rested, was a failure. A lot of effort and minimal achievement. ...read more.