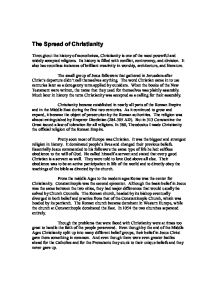 The Spread of Christianity

The Spread of Christianity Throughout the history of monotheism, Christianity is one of the most powerful and widely accepted religions. Its history is filled with conflict, controversy, and division. It also has countless instances of brilliant creativity in worship, architecture, and literature. The small group of Jesus followers that gathered in Jerusalem after Christ's departure didn't call themselves anything. The word Christian came in to use centuries later as a derogatory term applied by outsiders. When the books of the New Testament were written, the name that they used for themselves was plainly assembly. ...read more.

But in 313 Constantine the Great issued a law of toleration for all religions. In 380, Theodosius I made Christianity the official religion of the Roman Empire. Pretty soon most of Europe was Christian. It was the biggest and strongest religion in history. It dominated people's lives and changed their previous beliefs. Essentially Jesus commended to his followers the same type of life he led: selfless obedience to the will of God. He called himself a servant and stated that every good Christian is a servant as well. ...read more.

The Roman church, headed by its bishop eventually diverged in both belief and practice from that of the Constantinople Church, which was headed by its patriarch. The Roman church became dominant in Western Europe, while the church at Constantinople dominated the East. In 1054 the two churches separated entirely. Though the problems that were faced with Christianity were at times too great to handle the faith of the people persevered. Even though by the end of the Middle Ages Christianity split up into many different belief groups, their belief in Jesus Christ gave them something in common. And even though there were even greater battles ahead for the Catholics and for the Protestants they stuck to their unique beliefs and they never gave up. ...read more.