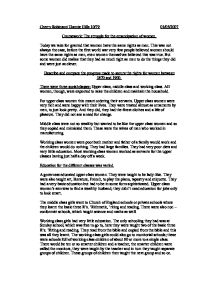 The struggle for the emancipation of women.

Cherry Robinson/ Dannie Hills 10/79 01/05/2007 Coursework: The struggle for the emancipation of women. Today we take for granted that women have the same rights as men. This was not always the case, before the first world war very few people believed women should have the same rights as men, even women themselves believed this was true. But some women did realise that they had as much right as men to do the things they did and were just as clever. Describe and compare the progress made to secure the rights for women between 1870 and 1900. There were three social classes: Upper class, middle class and working class. All women, though, were expected to raise the children and maintain the household. For upper class women this meant ordering their servants. Upper class women were very rich and were happy with their lives. They were treated almost as ornaments by men, to just look pretty. And they did, they had the finest clothes and a life of pleasure. They did not see a need for change. Middle class were not so wealthy but wanted to be like the upper class women and so they copied and mimicked them. These were the wives of men who worked in manufacturing. Working class women were poor both mother and father of a family would work and the children would do nothing. They had large families. They had very poor diets and very little education. Most working class women worked as servants for the upper classes having just half a day off a week. Education for the different classes was varied. A governess educated upper class women. They were taught to be lady-like. They were also taught art, literature, French, to play the piano, tapestry and etiquette. They had a very basic education but had to be in some form sophisticated. Upper class women's aim was to find a wealthy husband; they didn't need education for jobs only to look smart. ...read more.

Finally in 1928 voting became completely equal. I agree that women's efforts in the war helped them gain the right to vote. One of the reasons was that they helped out by making munitions (shells). They were made all over Britain in places such as Woolwich, Leeds and Birmingham. This was the first job women had during the war and the most important. Over 1 million women worked in munitions!! The reason they were allowed to start working in munitions factories was because the British army were severely low on shells after 1915. They were down to firing a few shells a day while we were bombarded with shells non-stop. The reason the shortage developed was because the government let too many of the munitions workers go and fight so there was a shortage of workers. When the shortage occurred the women again started asking for their right to serve but it was denied again. So they made a very famous march to Whitehall where they demanded the right to serve their country. Adding to that Mrs Pankhurst asked for women's wage conditions to become fairer. The P.M. at the time David Lloyd George obliged and allowed them to start working and have equal wages. Women did not only make shells they did lots of other significant work to make up for all the men that left to fight. Although after a while some of them had to be brought back e.g. the miners were called back because they were very important to the country back in Britain. Other jobs that women did included joining the Red Cross Society's 'Voluntary Aid Detachment'. They came to be later knows as VAD's, an example of a famous VAD was Vera Brittain. The VAD's only had basic medical training so they could give soldiers basic medical treatment. Most families of the VAD's didn't mind them doing other jobs but they were strongly against them being VAD's. ...read more.

She also was the first female mayor in England, which was also a major thing because that proved that men were starting to trust women's judgement. Therefore I conclude that neither side I argued for has a stronger case than the other. So before the war they were making progress and they might've got the vote but without their efforts in the war it may have taken them a longer time to prove just how important they were. In my opinion in the end justice prevailed and women were allowed to vote and gained their freedom . A portrait of Elizabeth Garret Anderson. I have decided to give you information about an individual that has had an impact on the Right for Women to Vote. Emily Davidson a member of the Suffragettes had made plans to go to the 1913 Derby to embark on a political course to draw attention to the women's movement. Her intentions to her members were unclear. When she arrived at the track she positioned herself inside the rails at Tattenham corner. Fifteen horses ran for a first prize of �6450, Craganour was the favourite. Shogun was second favourite, rank outsider at 50-1 was Anmer one of King George V's horses, rode by Herbert Jones. As the 1913 Derby began Emily Davidson waited until the kings horse was in sight and as it approached the corner Emily stepped out in front of Anmer and attempted to snatch the rains of the Kings horse. It is claimed that Emily held on for a few seconds, but the horse moving at over 30 m.p.h and weighing over three-quarters of a ton knocked her over. The horse stumbled throwing Jones violently to the ground, he and Emily both bleeding badly. Spectators rushed onto the track as the race continued. Both were taken to hospital, injuries sustained to Jones proved to be not serious. Unfortunately for Emily Davidson she never regained consciousness and died four days later. She was buried in Northumberland, the inscription on her grave stone read "Deeds, not words". Five years after her death women won the right to vote. ...read more.