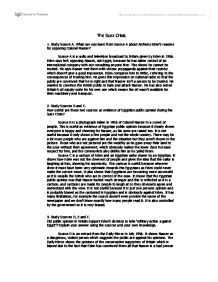 The Suez Crisis 1. Study Source A. What can you learn from Source A about Anthony Eden's reasons for opposing Colonel Nasser? Source A is a radio and television broadcast to Britain given by Eden in 1956. Eden says he's opposing Nasser, not Egypt, because he has taken control of an international company with out consulting anyone first. This shows he cannot be trusted. He says Nasser met them with vicious propaganda against their country which doesn't give a good impression. Eden compares him to Hitler, referring to the consequences of trusting him. He gives this impression on national radio so that the public are convinced that he is right and that Nasser isn't a person to be trusted. He wanted to convince the British public to hate and attack Nasser. He has also seized Britain's oil supply route for his own use which means the oil wasn't available for their machinery and transport. 2. Study Sources B and C. How useful are these two sources as evidence of Egyptian public opinion during the Suez Crisis? Source B is a photograph taken in 1956 of Colonel Nasser in a crowd of people. ...read more.

He has made irresponsible decisions in the past and they know better than to let him be in charge of that. In source H the writer says Eden was the reason the war didn't happen because of his decision to take military action against Egypt. This source is also biased because the writer of the book used to be British Foreign Secretary during the Suez Crisis so is likely to support Eden and his actions. Whereas, source G disagrees and says that Egypt should become less hostile to the West instead. Source H compares Nasser to Hitler, obviously agreeing with Eden's opinion of him and in source G he says "I have never thought Nasser a Hitler" but he did in source A when he says "We all know this is how dictatorships behave, and we all remember what the cost was of giving in to Hitler". The difference between the letter and the book extract is that a letter is much more personal and not meant for an audience. It also only shows something from one point of view from one point in history. Whereas the book extract includes much more information as it was wrote years later and aimed at more people. ...read more.

His choice to resign left Britain humiliated as they were frowned upon by other countries for their powerless leader. This then suggests that all of the decisions he had made about the Suez Crisis were a mistake and that he regretted making them. Also, Britain lost the canal to a weak country which shows they aren't strong anymore and people are beginning to question their superiority. They were never again a world power as they didn't have the general opinion on their side. The secret agreement Egypt had with Israel alienated Britain and put them down as they didn't know what was happening. The fact that other leaders didn't want to include Eden in their agreements shows that he wasn't respected or trusted by them. In conclusion, I think Britain was humiliated greatly due to Eden's poor policies and lack of support from the public. Eden played a huge role in Britain and his actions resulted in alienating his followers and allies. The fact that he assumed negative things about Nasser caused the public and other leaders to turn against him, presuming he is just in it for personal revenge. Although, he had nothing against Egypt as a country and this showed through his effort in the Suez Crisis. ?? ?? ?? ?? ...read more.