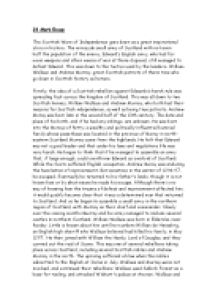 The Tactics of William Wallace and Andy Murray in Scotland's Wars Against England.

﻿20 Mark Essay The Scottish Wars of Independence goes down as a great inspirational story in history. The miniscule small army of Scotland with not even half the population of the enemy, Edward?s English army, who had far more weapons and other means of war at there disposal, still managed to defeat Edward. This was down to the tactics used by the leaders- William Wallace and Andrew Murray, great Scottish patriots of there time who go down in Scottish history as heroes. Firstly, the idea of a Scottish rebellion against Edwards?s harsh rule was spreading fast across the kingdom of Scotland. This was all down to two Scottish heroes, William Wallace and Andrew Murray, who both had their reasons for Scottish independence, as well as being true patriots. Andrew Moray was born late in the second half of the 13th century. The date and place of his birth, and if he had any siblings, are unknown. He was born into the Morays of Petty; a wealthy and politically-influential baronial family whose powerbase was located in the province of Moray in north-eastern Scotland Murray came from the highlands. He felt that Edward was not a good leader and that under his laws and regulations life was very harsh. ...read more.

On 11 September 1297, the forces of Andrew Moray and William Wallace defeated the combined English forces of John de Warenne, 6th Earl of Surrey and Hugh de Cressingham near Stirling, on the River Forth. John de Warenne had won a victory over the aristocracy of Scotland at the Battle of Dunbar and his belief that he was now dealing with a rabble proved that he had greatly underestimated the Scottish forces. The small bridge at Stirling was only broad enough to allow two horsemen to cross at a time. The Scots set themselves out in a commanding position dominating the soft, flat ground to the north of the river. Sir Richard Lundie offered to outflank the enemy by leading a cavalry force over a nearby ford, where sixty horsemen could cross at the same time. Hugh Cressingham was anxious to avoid any unnecessary expense in prolonging the war and he persuaded the Earl to reject this advice and order a direct attack across the bridge. The Scots waited as the English knights and infantry made their slow progress across the bridge. They had held back earlier in the day when many of the English and Welsh archers had crossed, only to be recalled because de Warenne had overslept. ...read more.

The Scots hid at the top of the abbey craig until the English were crossing the bridge (which could only take two horse at a time) and charged from the top of the hill. The English had no chance to organize themselves and were heavily massacred. Another tactic that Scotland used that proved important was schiltrons. Under Wallace?s leadership Scotland used static schiltrons in which there would be layer upon layer of men in a circle which was a good defensive tactic and protected a lot of troops as well. However, this tactic wasn?t quite right at first in the way it was used. For example at the Battle of Falkirk Scotland used still schiltrons but were unable to protect themselves from the front line of the English army. Later on when Robert the Bruce took over as leader of the Scottish army he adapted the idea of Wallace?s static schiltrons and decided that they should move while in battle. This use of the schiltron proved far more successful than the previous use. In conclusion, without the tactics employed by Wallace and Murray, there would have been a very little chance that they would have been able to overcome the English army. What they did saved Scotland and the Scottish people from a very harsh life under King Edward?s harsh and unpredictable rule. ...read more.