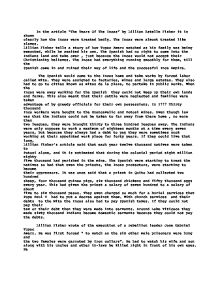 The Tears Of The Incas

In the article "The Tears Of The Incas" by Lillian Estelle Fisher it is shown clearly how the Incas were treated badly. The Incas were almost treated like slaves. Lillian Fisher tells a story of how Tupac Ameru watched as his family was being executed, while he awaited his own. The Spanish had no right to come into the Indians land and take over , just because the Incas would not accept their Christianity believes. The Incas had everything running smoothly for them, till the Spanish came in and ruined their way of life and the successful Inca Empire. The Spanish would come to the Incas home and take works by forced labor called Mita. They were assigned to factories, mines and large estates. ...read more.

If they could live that long, Lillian fisher's article said that each year twelve thousand natives were taken to Potosi alone, and it is estimated that during the colonial period eight million eighty five thousand had perished in the mine. The Spanish were starting to treat the natives so bad that even the priests, the Incas protectors, were starting to become their oppressors. It was once said that a priest in Quito had collected two hundred sheep, four thousand guinea pigs, six thousand chickens and fifty thousand eggs every year. This had given the priest a salary of seven hundred to a salary of about five to six thousand pesos. They even charged so much for a burial services that Pope Paul V had to put a decree against them. ...read more.

His body was so strong that he was not pulled apart, so he was beheaded then cut up. His body parts where then sent to various parts of Peru. He was sent as a warning to all potential followers of this rebellions against the Spanish. The hardships the Spanish had caused the Incas had made the natives to dislike how they were being treated. The Spanish were starting to think of the Incas as their personal servants and almost as slaves. The Incas really only had one thing to do, and it was to rebel against the Spanish. The Spanish then executed the rebel leader and most of his family. The Incas also didn't get any help from the king because the Corregidors covered it up to gain money for themselves. This is why it was wrong for the Spanish to come into the natives lands and take over. ...read more.