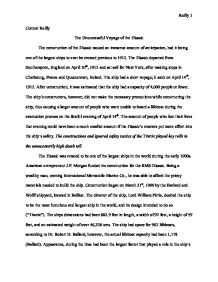 The Titanic Disaster. The construction of the Titanic had been poor and resulted in the ship being fragile and damaged easily. There had been few precautions made in order to ensure the safety of the travelers during the trip from Southampton, England to

Connor Reilly The Unsuccessful Voyage of the Titanic The construction of the Titanic caused an immense amount of anticipation, had it being one of the largest ships to ever be created previous to 1912. The Titanic departed from Southampton, England on April 10th, 1912 and set sail for New York, after making stops in Cherbourg, France and Queenstown, Ireland. The ship had a short voyage; it sank on April 14th, 1912. After construction, it was estimated that the ship had a capacity of 4,000 people or fewer. The ship's constructors, however, did not make the necessary precautions while constructing the ship, thus causing a larger amount of people who were unable to board a lifeboat during the evacuation process on the fateful evening of April 14th. The amount of people who lost their lives that evening could have been a much smaller amount if the Titanic's creators put more effort into the ship's safety. The constructions and ignored safety tactics of the Titanic played key rolls in the unnecessarily high death toll. The Titanic was created to be one of the largest ships in the world during the early 1900s. ...read more.

Dr. Ballard remarks, "The ship had lifeboats for barely half the estimated 2,200 [people] on board. Incredibly, the Titanic actually carried more lifeboats than the British Board of Trade regulations of the day required" (Ballard). The lifeboat requirement had been in direct proportion to the ship's gross tonnage, explains Candace Keener of HowStuffWorks. The Merchant Shipping Act of 1894 "stopped calculating at a ship of 10,000 tons, which was beholden to carry 16 lifeboats. Titanic, which had about 35,000 tons on that figure, carried precisely 16 lifeboats" (Keener). The Merchant Shipping Act required a ship of a much lighter weight than the Titanic to carry 16 lifeboats. The Titanic had strategically hidden only 16 lifeboats for the trip to New York. Based on the Act, it is estimated that the Titanic should have carried approximately 70 lifeboats. Safety supplies had also been a concern. The ship had been short on supplies, such as binoculars (used by spectators and crew members on higher decks) and searchlights. Crewmembers and the captain of the Titanic had ignored the precautions. The devastating amount of deaths could have been avoided if they had put more effort into making the ship safe. ...read more.

The collapsing stack pulled the mast in a backward direction. The main reasoning behind the fatal loss of the Titanic had been in direct contact with its construction, as well as the crewmembers' actions. The iceberg that collided with the shit had been a large contributor, but the ship's construction was poorly thought out, concluding in the sinking of the ship and the high death toll. The construction, ignored precautions, and main reasoning behind the end of the Titanic resulted in a majority of the lives' of travelers being lost. The construction of the Titanic had been poor and resulted in the ship being fragile and damaged easily. There had been few precautions made in order to ensure the safety of the travelers during the trip from Southampton, England to New York. Besides from the construction and ignored precautions, there had been obvious conclusions behind the collapse of the ship on April 14th. Although it had been a beautiful ship on the outside, it lacked the important fundamentals on the inside, especially in the engine room where little notice had been taken. If the necessary precautions had been made, and the construction had been better planned, there could have been more survivors of the accident to tell their hidden stories; however, there is only a limited amount of facts to be researched and read. ...read more.