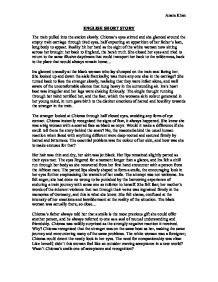 The train pulled into the station slowly.

ENGLISH SHORT STORY The train pulled into the station slowly. Chioma's eyes stirred and she glanced around the empty train carriage through tired eyes, half expecting an apparition of her father's lean, long body to appear. Reality hit her hard as the sight of the white woman now sitting across her brought her back to England, the harsh truth. She closed her eyes and tried to return to the same illusive daydream that could transport her back to the wilderness, back to the place that would always remain home... Ira glanced uneasily at the black woman who lay slumped on the train seat facing her. She looked up and down the aisle frantically; was there any one else in the carriage? She turned back to face the stranger slowly, realising that they were infact alone, and well aware of the uncomfortable silence that hung heavy in the surrounding air. Ira's heart beat was irregular and her legs were shaking furiously. The single thought running through her mind terrified her, and the fear, which the womans skin colour generated in her young mind, in turn gave birth to the distinct emotions of hatred and hostility towards the stranger in the train. The stranger looked at Chioma through half closed eyes, avoiding any form of eye contact. Chioma instantly recognised the signs of fear, it always happened. ...read more.

Ira allowed these feeling to emerge, regardless of whether it was right or wrong, good or bad. She was finally sick of the self-control she has been practising since she entered England. She was tired of masks which only allowed appropriate behaviour to be seen. She knew she had to unleash the fierce repulsion she was experiencing when faced with the sight of black skin. Surely, this could not be right...Ira tried to check her feelings, but it was too late. The hatred had been unleashed, it now hung in the air suffocating them both, and Ira had opened the door to her personal hell. She faced her fears, her intolerance and, most importantly, she confronted the loneliness that plagued her days and nights. She acknowledged that words were essential, however dangerous they may be. Weapons of deception in the games people play, she still needed them. She wondered though; was a smile a sufficient substitute? Chioma could feel the familiar sensation envelope her body and cause her head to spin. She smiled to herself, and waited for the moment to pass. Ira hated the consideration and friendship that had been offered to her, as it had asked for nothing in return. Which was absurd, unreal, and against the laws of nature! These thoughts entrapped her momentarily, and soon she had felt such pure hatred, she had no more malice left in her heart. ...read more.

Exhilaration and optimism filled the air. The smiles remained fixed. The placid gazes intensified as each woman realised the purpose and importance of this first encounter. Ira saw how this rendezvous on the train had changed her perspective. Furthermore, this encounter had affected her spirit, her self esteem, Ira's ability to love and accept. Ira realised that this encounter held a hidden message for her, a message that she was slowly coming to understand. How could she ignore this encounter as being no more than a mere coincidence? She had been fighting for that tiny bit of space in a strange community, where she had to put up a fight if she didn't want others imposing their rules on her. The stranger had helped her understand herself. They were fighting together. Ira now understood. "Some one in the world awaits you, whether it's in the middle of a desert or in some great city. And when two such people meet, the past and future become unimportant. There is only that one moment, and the incredible certainty then that everything under the sun has been written by one hand only. It is that hand that evokes love and friendship, and creates a twin soul for every person in this world." Chioma fondly recalled her father's words, and felt assured by this memory. She had crossed the desert, travelled the great city, and was finally fulfilled. She looked over at her friend who now sat next to her, and noticed nothing but the depth and beauty of her sea-green eyes. Anam Khan ...read more.