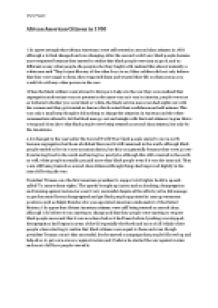 The Treatment of African American Citizens in 1950

﻿Chris Peach African American Citizens in 1950 I do agree strongly that African Americans were still treated as second class citizens in 1950 although a lot had changed and was changing. After the second world war, black people became more respected because they started to realise that black people were just as good, and no different as any other people, the people who they fought with realised this almost instantly, a white man said ?They?re just like any of the other boys to us. Other soldiers did not only believe that they were equal to them, they respected them and trusted their life on them just as you would do with any other person in the war. ...read more.

black men go out and mingle with the local citizens, I agree this is wrong and does show that black people were being treated as second class citizens, but only by the Americans. A lot changed in the years after the Second World War, black people stared to move north because segregation had been abolished there and it still remained in the south, although black people tended to live in worse accommodation, but this was generally because they were poorer from having lived in the south and having low paid jobs, although this still occurred in the north as well, white people normally got paid more than black people even if it was the same job. ...read more.

I do agree that African American citizens were still being treated as second class, although I do believe it was starting to change and that they people were starting to respect black people more and that it was nowhere bad as it had been before, lynching was stopped, desegregation had begun in areas of the US especially the North and most of all I think white people where starting to realise that black citizens were equal to them and even though president Truman wasn?t that successful, but he started a campaign that people followed up and helped us to get were are now against racism and I believe he started the war against racism and most of all how people viewed it. ...read more.