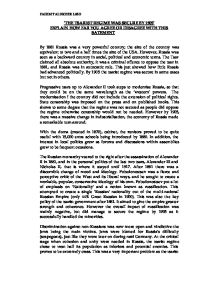 'THE TSARIST REGIME WAS SECURE BY 1905' EXPLAIN HOW FAR YOU AGREE OR DISAGREE WITH THIS SATEMENT By 1881 Russia was a very powerful country; the size of the country was equivalent to two and a half times the size of the USA. However, Russia was seen as a backward country in social, political and economic terms. The Tsar claimed all absolute authority, it was a criminal offence to oppose the tsar in 1881, and Russia was in autocratic rule. This just showed how little Russia had advanced politically. By 1905 the tsarist regime was secure in some cases but not in others. Progressive tsars up to Alexander II took steps to modernise Russia, so that they could be on the same wavelength as the 'western' powers. The modernisation f the country did not include the extension of political rights. State censorship was imposed on the press and on published books. This shows to some degree that the regime was not secured as people did oppose the regime otherwise censorship would not be needed. However by 1905, there was a massive change in industrialisation, the economy of Russia made a remarkable turn around. With the duma (created in 1870), cabinet, the zenistra proved to be quite useful with 15,000 extra schools being introduced by 1880. In addition, the interest in local politics grew as forums and discussions within assemblies grew to be frequent occasions. The Russian monarchy veered to the right after the assassination of Alexander II in 1881, and in the personal politics of the last two tsars, Alexander III and Nicholas II, that is where it stayed until 1917. ...read more.

Emancipation had a far worst effect on the nobility because they were totally unprepared and as a result did not survive, they had to sell of land to pay existing debts. The most important reason for Emancipation was the desire to strengthen the Russian State in military, economic and industrial terms. It was hoped that revitalised peasant economy would provide the basis for industrialisation by providing surplus capital for investment, but this aim was not achieved. Therefore the Emancipation Decree of 1861 did not solve the problems of the peasantry and only made things worse then they already were. This showed that the regime was not very secure at all, and had opposition in this case, as the poor were treated badly and wanted to start a revolution. Emancipation act of 1861 had a far-reaching effect on Tsarist society by not solving the problem of the peasantry because of the economic, social and political effects. Conditions for the poor had worsened since 1891 when famine swept through the southern region of Russia and forced millions of peasants to leave their families and village communities to search for work in towns. Most of the industrial workers who worked in the factories were peasants and women. Women filled the textile factories in St Petersburg and Moscow, which was the poorest paying industry in Russia.. The industrial workers were angry at the poor living and working conditions. Living space was at a premium so workers had to occupy accommodation provided by the employers. There were ten to a room and a single sheet separated bedrooms. There was no privacy and famine easily spread. Also there were no regulations on safety or hours of work, so some people died or were badly injured and had to work 12-15 hours per day. ...read more.

The outstanding spokesman for this viewpoint was Lenin. Although the Bolshevik Party was well organised and was becoming increasingly popular in Russia, both Lenin and his deputy were caught unawares by the March Revolution of 1917 and were unable to seize the opportunity offered by this revolution to get themselves into power. Hence the liberals got in first. The tsarist regime remained secure as none of the oppositions were able to pose a threat to the Tsar up to 1905. This was achieved through the Okhrana, the army and greater police surveillance to keep the opposition in check. Also in each group there seemed to be disturbances which stopped the groups from succeeding such as leadership disputes, little success, couldn't seize power etc. In conclusion, I don't the tsarist regime was not totally secure by 1905. The economy and the industry of the country got a massive boost through the direction of Sergei Witte. The 'great spurt' helped to stimulate reformers and revolutionaries alike through the rapid industrial growth in the 1890s. It was very successful in crushing all opposition through the Okhrana, the army, the Orthodox Church and by 1905 opposition groups didn't pose a serious threat as the groups were much disorganised. However on the other hand by 1905 the regime was opposed and angered many peasants and middle class workers, they endured sickening working conditions the were living in poverty and received poor wages, and had to pay taxes on grain and also on items such as alcohol and salt. If I was personally in their position I would consider revolting and would be willing to part of a revolution. By 1905 the Tsarist regime was secure in some places but not in others. FAHIM TALUKDER L6SD ...read more.