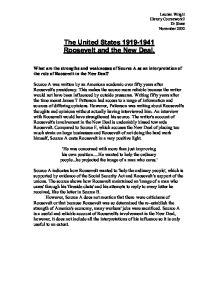 The United States 1919-1941 - Roosevelt and the New Deal. What are the strengths and weaknesses of Source A as an interpretation of the role of Roosevelt in the New Deal?

The United States 1919-1941 Roosevelt and the New Deal. What are the strengths and weaknesses of Source A as an interpretation of the role of Roosevelt in the New Deal? Source A was written by an American academic over fifty years after Roosevelt's presidency. This makes the source more reliable because the writer would not have been influenced by outside pressures. Writing fifty years after the time meant James T Patterson had access to a range of information and sources of differing opinions. However, Patterson was writing about Roosevelt's thoughts and opinions without actually having interviewed him. An interview with Roosevelt would have strengthened his source. The writer's account of Roosevelt's involvement in the New Deal is undeniably biased towards Roosevelt. Compared to Source F, which accuses the New Deal of placing too much strain on large businesses and Roosevelt of not doing the hard work himself, Source A casts Roosevelt in a very positive light. 'He was concerned with more than just improving his own position.....He wanted to help the ordinary people...he projected the image of a man who cares.' Source A indicates how Roosevelt wanted to 'help the ordinary people', which is supported by evidence of the Social Security Act and Roosevelt's support of the unions. The source shows how Roosevelt maintained an 'image of a man who cares' through his 'fireside chats' and his attempts to reply to every letter he received, like the letter in Source B. ...read more.

At the beginning of the New Deal nearly a quarter of the able work force of America were unemployed. Within four years Roosevelt had reduced that statistic by 10%. Evidence of this is in Source E. Although, Source E was published by the US government therefore is unreliable and does not include other influences to the rise and fall of unemployment during this period, it does show that it fell during the New Deal years. Not only did Roosevelt's New Deal provide millions of jobs generally, it also specifically created opportunities for Black Americans, Native Americans and women that they had never had before. Many black people benefited from the CCC, slum clearances and housing projects. Likewise many Native Americans benefited because of the Indian Reorganisation act which provided them with the money to buy and improve land, and the Indian Reservation Act which enabled the Indians to preserve and practise their own traditions, laws and culture. Women also benefited from the New Deal as many began to achieve prominent positions, for example Eleanor Roosevelt and Mary Macleod Bethune. In Source C Frances Perkins writes "the 'New Deal' meant that the forgotten man, the little man, the man nobody knew much about, was going to be dealt better cards to play with' This little 'man' not only meant the poor farmers and industrial workers but also the Black Americans, the Native Americans and the women. Source C may be biased because it was written by an ex-employee of Roosevelt's, however, the writer was a woman with the prominent position of Secretary of Labour in Roosevelt's government. ...read more.

Roosevelt was bound to receive criticism from big business because they were never going to accept America's need for a shift of power, and he was also never going to completely solve America's problems because there were just far too many. Roosevelt himself was a successful President because he kept his promises and made himself available to the public, he maintained their confidence and he kept them well informed through his 'fireside' chats and his inspiring speeches, for example his speech in Source I 'The basic things expected by our people are simple, They are: equal opportunity for youth and others, jobs for those who can work, security for who need it and the ending of special privileges for the few.'. Source D is a photograph of Roosevelt visiting a CCC in Virginia, although this is a photograph and could therefore be a posed or manipulated image, it is yet another example of Roosevelt keeping in touch with the people. America could not have been too discontented with him or the New Deal because he was re-elected for a second term in the white House. If Roosevelt had been bolder he would have been further criticised by big business and if he had not been as bold as he was, the majority of America would have continued living in total poverty, Roosevelt's New Deal was very successful and kept both sides relatively happy, he could have done no more, therefore Roosevelt and the New Deal were just right. Laurian Wright History Coursework2 Dr Shaw November 2002 ...read more.