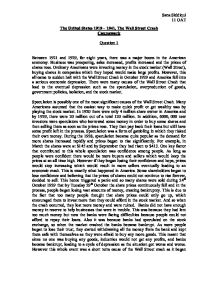 The United States 1919 - 1941, The Wall Street Crash Coursework Question 1 Between 1921 and 1929, for eight years, there was a major boom in the American economy. Business was prospering, sales increased, profits increased and the prices of shares rose. Ordinary Americans were investing money in the stock market (Wall Street), buying shares in companies which they hoped would make large profits. However, this all came to sudden halt with the Wall Street Crash in October 1929 and America fell into a serious economic depression. There were many causes of the Wall Street Crash that lead to the eventual depression such as the speculation, overproduction of goods, government policies, isolation, and the stock market. Speculation is possibly one of the most significant causes of the Wall Street Crash. Many Americans assumed that the easiest way to make quick profit or get wealthy was by playing the stock market. In 1920 there were only 4 million share owner in America and by 1929, there were 20 million out of a total 120 million. In addition, 6000, 000 new investors were speculators who borrowed some money in order to buy some shares and then selling them as soon as the prices rose. They then pay back their loans but still have some profit left in the process. Speculation was a form of gambling in which they risked their own money. During the 1928, speculation became quite popular as the demand for more shares increased rapidly and prices began to rise significantly. For example, in March the shares were at $145 and by September they had risen to $413. One key factor that contributed to this whole speculation was confidence among people. As long as people were confident there would be more buyers and sellers which would keep the prices at an all time high. However if they began losing their confidence and hope, prices would stop increasing which would result in more sellers eventually leading to an economic crash. ...read more.

Source A also demonstrates what the election issue is about and how the idea of a do nothing president is shown rivalling Franklin Roosevelt. This source furthermore indicates that there were bonus marchers and this is shown in 'Warning - Do not risk Federal arrest by looking glum!' written on the poster at the very bottom. This is because when the bonus marchers started protesting demanding their money slightly early, they were instead shot down and killed brutally. However, this source does have a few limitations and does not tell us what President Hoover did do and contribute to help the economy. Although things showed no signs of improving, he was reluctant to help those affected by the Depression. It doesn't say that Hoover tried to restart the economy by persuading business leaders to not cut down wages and during 1930 -31 he even began cutting down taxes slightly so that people would be able to spend money. In addition, he even set up the Reconstruction Finance Company which helped banks by preventing them from going bankrupt, thus encouraging citizens to put their savings, and then the boom could progress again. Nevertheless, this source does not explain what factors the Democratic Party and what Franklin Roosevelt would do to aid the economy and encourage people to buy shares abolishing the Depression. Since it is only one group's pint of view which means that it does not necessarily show how other people felt towards the Republican Party. Also it is only one Democrat election poster so we would have to study more to see if it was typical of the Democrats election campaign. Source A is can be fairly reliable as it is directly addressing to the American population and is relevant to everyone, not aimed at any particular class of society. However there are many aspects that may suggest that it is less reliable because it can be biased due to the fact that it is published by the Democratic Party in favour of Franklin Roosevelt and are clearly against Hoover. ...read more.

This is because if people stopped panicking, then their confidence will rise and then they can start buying shares again which would make the whole cycle of the boom revive again possibly ending the depression in the process. To conclude, this source does not entirely agree with the statement as the poor did end up suffering as a result of this but the people who had invested also suffered enormously due to the companies going bankrupt, Therefore, it is hard to say whether this source completely agrees with the statement or not, and so this is a balanced source as it can show that the middle classes and rich suffered by investing too much money, however, it can also show that as a knock on effect, since businesses were broke, unemployment increased which also remained in the poor section of the society, thus causing them to suffer as well. To conclude, some sources for example, A, B, D, and F provide sufficient evidence in proving that this quotation is correct as they all agree that the poor suffered quite heavily due to the Depression. However, source F disagrees with this quotation as it argues that the middle classes suffered more compared to the poor as the poor didn't have anything to lose and they weren't the ones who lost all their money through investment like the rich or wealthy classes. Source C on the other hand, did not clearly agree or disagree with the statement as it provides a balanced view. This is because you can interpret the facts and figures as showing that the wealthy people suffered because of more loss of money, jobs, and opportunities or you can consider this source as showing that the poor suffered due to the companies loss even more as they had absolutely no money compared to the rich people and as a result also lost their small jobs and homes. ?? ?? ?? ?? Sana Siddiqui 11 OAT ...read more.