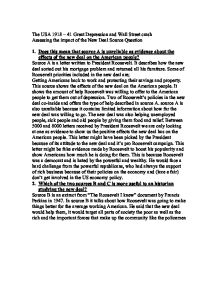 Source E is advertising a positive picture of the US at the time of depression. It is trying to project a good image of US companies, which can possibly be used to attract tourism and encourage consumer goods buying and confidence. It can also be used to encourage average Americans and build morale, confidence in the US economy, businesses, industries and consumer confidence. It might even start the boom again. This company doesn't see Roosevelt's policies or his new deal, as a threat to itself infact the new deal has helped many banks and companies re-open and start up after bankruptcy and closure caused by the depression. The new deal and its massive government intervention have helped many companies get back on their feet. This company clearly just wants to build up confidence in itself and is more concerned and effected by the depression. This company might even prefer the republican government later but the republican trade tariffs and (laze e fair) don't get involved policy made the depression worse at the time. But for now the democrat Roosevelt's new deal policy and massive government intervention was working and helping the US economy where everything else even republican policies failed. ...read more.

At the same time speculation was being cleared of banks and their loans were reduced or wiped off. Then after security checks banks were reopened by the federal government. Corruption in high places was hit hard and was reduced to no high level corruption. Prohibition was ended to free up resources, increase security and limit the power of organised crime, which was increasing while the republicans were in power. The US economy was ruined and Wall Street financial stock markets had crashed. There were weaknesses in the US economy that's why the wall street crash happened in the first place. The republicans and their policies allowed these weaknesses to go ahead. Companies started overproducing and few people could afford to buy the goods. The republican trade tariffs made the depression worse because they couldn't sell their products abroad into Europe. The republican economy policy was not to get involved. The new deal saw that helping the US economy out is the only way foreword. The new deal borrowed money to industries and to anyone who needed it to get them out of debt. The government also gave money to contribute to the economy. The new deal scraped tariffs and so fixed these weaknesses in the US economy. ...read more.