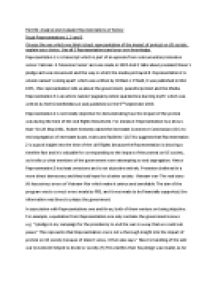 The USA in the 1960s. Study Representations 1, 2 and 3 Choose the one which you think is best representation of the impact of protest on US society, explain your choice

﻿Part Bii: Analyse and evaluate Representations of history Study Representations 1, 2 and 3 Choose the one which you think is best representation of the impact of protest on US society, explain your choice. Use all 3 Representations and your own knowledge. Representation 1 is a transcript which is part of an episode from a documentary television series-?Vietnam: A Television Series? and was made in 1983.And it talks about president Nixon?s pledge anti was movement and the way in which the media portrayed it .Representation 2 is a book named ?coming apart? which was written by William L O?Neill, it was published in USA 1971, this representation tells us about the government, peaceful protest and the Media. Representation 3 is an article named ?pageant protest sparked bra-burning myth? which was written by Nell Greenfieldboyce and published on the 5th September 2008. Representation 2 is not totally objective for demonstrating how the impact of the protest was during the time of the civil Rights Movement. For instance: Representation two shows that ?On 28 May 1961, Robert Kennedy asked the interstate Commerce Commission (ICC) to end segregation of interstate buses, trains and facilities.?(2) This suggests that Representation 2 is a good insight into the time of the civil Rights because the Representation is showing a timeline fact and it is valuable for corresponding to the impact of the protest on US society, as it tells us what members of the government were attempting to end segregation. ...read more.

As a result the representation shows accuracy, just as it states facts and talks about many protests. Nevertheless the only thing it omits is violence in protest, but the intensity of accuracy is significant. The PBS did not keep their 4 promises (Undelivered and failed to keep).?The series will supply information for the historical record? ? they did not deliver this promise ?Only Kaleidoscope of images? which makes it inaccurate and creates a subjective view. Another promise that was failed to deliver was ?The series will provide an antidote to the misuses of history? ? this contributes to historical misunderstanding. ?The series will contribute to reality and to national esteem in the post war era? ?America are not proud, there is nothing g in the series that an American can be proud of. The fourth is? The series will contribute to historical methodology? ? this is undelivered and object lesson is how not to do it. Adversely with Representations 1 and 3, both Representations are rationally accurate and an example is that Representation 1 shows us that the Media are misleading ?Perhaps when we start looking to see who has misled us...in the studios of the TV networks in New York. It even shows us that it isn?t a good insight into the impact of protest on US society as it talks about the Media. ...read more.