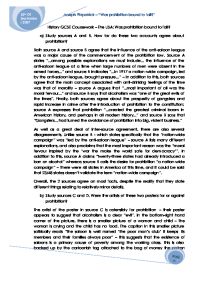 The USA: Was prohibition bound to fail?

History GCSE Coursework - The USA: Was prohibition bound to fail? a) Study sources A and B. How far do these two accounts agree about prohibition? Both source A and source B agree that the influence of the anti-saloon league was a major cause of the commencement of the prohibition law. Source A states "...among possible explanations we must include... the influence of the anti-saloon league at a time when large numbers of men were absent in the armed forces..." and source B indicates "...in 1917 a nation-wide campaign, led by the anti-saloon league, brought pressure..." - In addition to this, both sources agree that the main concept associated with anti-drinking feelings of the time was that of morality - source A argues that "...most important of all was the moral fervour..." and source B says that alcoholism was "one of the great evils of the times". Finally, both sources agree about the prosperity of gangsters and rapid increase in crime after the introduction of prohibition to the constitution; source A expresses that prohibition "...created the greatest criminal boom in American history, and perhaps in all modern history..." and source B says that "Gangsters... had turned the avoidance of prohibition into big, violent business." As well as a great deal of inter-source agreement, there are also several disagreements. Unlike source B - which states specifically that the "nation-wide campaign" was "led by the anti-saloon league" - source A lists many different explanations, and also proclaims that the most important reason was the "moral fervour inspired by the 'war the make the world safe for democracy'". In addition to this, source A claims "twenty-three states had already introduced a ban on alcohol" whereas source B calls the desire for prohibition "a nation-wide campaign" - There were 48 states in America at this time, and it could be said that 23/48 states doesn't validate the term "nation-wide campaign". ...read more.

This suggests that there is honesty in source J, as the policeman whose words make up the contents of the source also describes "a conspiracy" and he says that "my superior officers were involved in it". The cartoon suggests that prohibition agents, police, politicians, magistrates, petty officials, and clerks are all in on the corruption. The policeman says that "if you tried to enforce the law they'd put you in a post where there was nothing but weeds" - also backing up the claim of the cartoon that the police force were in on it, and also suggesting magistrates and other positions in the law enforcement sector were also involved. "Big Bill" Thompson - the Mayor of Chicago - was also known to have taken bribes from alcohol-dealing gangsters. However, the FBI and prohibition agents were never based locally, and as a result a large proportion were unaffected by bribery chains - they even managed to arrest Al Capone on charges of tax evasion. This goes against the claim made in source I that prohibition agents were also corrupt. Despite this, source J in itself is highly reliable - the policeman admits to being unable to do his job properly, an honesty that makes his statements uncommonly unbiased. Arguably the policeman could have exaggerated the amount of corruption going on to make himself appear less corrupted individually, but the fact that source I suggests such a widespread amount of corruption fills in many gaps in the trustworthiness of the policeman's words - to a fair extent, source I proves that the policeman in source J is telling the truth. f) Study all the sources. Do these sources support the view that the failure of prohibition was inevitable? The sources overall suggest that prohibition was a mistake, was conceived for the wrong reasons, and was not what the American public wanted. Some sources also give evidence that the main reasons for the downfall of the law were due to poor enforcement - the republican party ...read more.

The failure of prohibition was inevitable if there was no way to prevent the steady increase of lawbreaking. Sources I and J both show clearly the extent of the corruption amongst those who should have been enforcing prohibition. Arguably, the corruption would have been avoidable if some changes were made to law enforcement. However, due to the widespread influence and large amounts of resources (in terms of both money and support) controlled by various organised crime groups across America, it would have been impossible to get rid of bribery completely, and small amounts of corruption, especially nearer the "top" of the "chain" of law enforcement offices, can escalate and spread into a web of corruption extremely easily. The failure of prohibition was inevitable if organised crime groups could so easily corrupt those who should have been enforcing it. The failure of prohibition was inevitable. The majority of Americans had a certain level of structure and habit in their lives, and additionally a large proportion of Americans would drink alcohol as part of this structure. The gigantic change of prohibition couldn't possibly fit into the lives of Americans who were used to slow, gradual, change, and who preferred simple lives. During the first world war, a large number of the alcohol-consuming population were away; grain needed to be preserved; German-Americans who were associated with alcohol production were seen as evil; the government encouraged a strong sense of morality in order to keep up support for the war; as soon as the war ended, alcohol-drinkers came back, and most of the reasons for prohibition became obsolete. Most Americans during this era wanted to drink; alcohol was known to be addictive and "corrupting"; the government knew that prohibition was not wanted, and the public knew, causing the law to lose respect; Gangsters like Al Capone were powerful and enterprising, there was no way that the law could be enforced. No law can succeed if the public are not prepared to obey it, and officials are not prepared to enforce it. ?? ?? ?? ?? Joseph Fitzpatrick - "Was prohibition bound to fail?" ...read more.