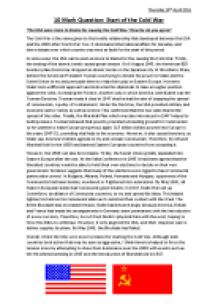 The USA were more to blame for causing the Cold War. How far do you agree?

Transfer-Encoding: chunked ﻿Thursday 14th April 2016 10 Mark Question: Start of the Cold War ?The USA were more to blame for causing the Cold War.? How far do you agree? The Cold War is the name given to the hostile relationship that developed between the USA and the USSR after World War Two. It dominated international affairs for decades, and there debate over which country was most at fault for the start of this period. In some ways, the USA can be seen as more to blame for the causing the Cold War. Firstly, the testing of the atomic bomb caused great tension. On 6 August 1945, the American B29 bomber plane Enola Gay dropped an atomic bomb on the Japanese city of Hiroshima. ...read more.

Under the Doctrine, the USA provided military and economic aid to Turkey as well as Greece. This confirmed that the two sides feared the spread of the other. Finally, the Marshall Plan which was also introduced in 1947 helped to build pressure. Truman believed that poverty provided a breeding ground for Communism so he wanted to make Europe prosperous again. $17 billion dollars poured into Europe in the years 1947-51, providing vital help to the economy. However, it also caused tensions, as Stalin saw America?s hidden agenda to try and contain Communism. Therefore, he refused Marshall Aid for the USSR and banned Eastern European countries from accepting it. However, the USSR can also be to blame. ...read more.

This helped tighten his hold on his Communist allies as it restricted their contact with the West. The Berlin Blockade also increased tension; Stalin had become angry because America, Britain and France had made the arrangements in Germany seem permanent with the introduction of a new currency. Therefore, he cut West Berlin?s physical links with the west, hoping to force the Allies to withdraw. However, it only angered the USA, and their response was to deliver supplies by plane. By May 1949, the Blockade had failed. Overall, I think the USA were more to blame for starting the Cold War. Although both countries took action that may be seen as aggressive, I think America helped to force the tension more by attempting to show their dominance over the USSR with events such as the Hiroshima bombing in 1945 and the introduction of Marshall Aid in 1947. http://www.kidport.com/reflib/usahistory/americanicons/images/USFlag.gif http://cheyennayoungcoldwar.weebly.com/uploads/2/9/9/5/29954103/5324860_orig.jpeg ...read more.