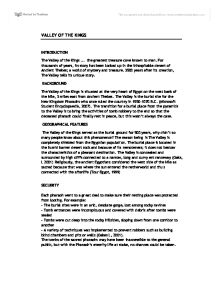 The Valley of the Kings

VALLEY OF THE KINGS INTRODUCTION The Valley of the Kings ... the greatest treasure cove known to man. For thousands of years, its story has been locked up in the inhospitable desert of Ancient Thebes; a world of mystery and treasure. 3500 years after its creation, The Valley tells its unique story. BACKGROUND The Valley of the Kings is situated at the very heart of Egypt on the west bank of the Nile, 3 miles east from Ancient Thebes. The Valley is the burial site for the New Kingdom Pharaohs who once ruled the country in 1550-1070 B.C. (Microsoft Student Encyclopaedia, 2007). The transition for a burial place from the pyramids to the Valley is to bring the activities of tomb robbery to the end so that the deceased pharaoh could finally rest in peace, but this wasn't always the case. GEOGRAPHICAL FEATURES The Valley of the Kings served as the burial ground for 500 years, why didn't so many people know about this phenomenon? The reason being is The Valley is completely shielded from the Egyptian population. The burial place is located in the humid barren desert rock and because of its remoteness; it does not bestow the characteristics of a pleasant destination. ...read more.

Papyri reveal that looters would go to the limit and torch the tomb of the mummy to be certain everything including the mummy disintegrates leaving the gold behind (Discovery Channel, 2002). The robbers were tortured by the beating of hands and feet with a double rod called the 'birch and the screw punishment' and the Pharaoh always attended to witness the punishment. The ultimate punishment was impalement which was the process of shoving the accused into a series of long sharp sticks resulting in a very slow painful death (Oakes L, 2001). TOMB SITES The changes in tomb location and construction begun when Thutmose I hid his tomb in the limestone cliffs beyond the Deir el-Bahri, resulting the Pharaoh to break a 1200 year old tradition in royal tomb construction. Since his example, he has influenced 62 other pharaohs from the 18th to 20th Dynasties in The Valley of the Kings. In the first half of the 18th dynasty, tombs such as Amenhotep II were buried high atop inside the dense limestone cliffs whereas at the end of the 19th century, tombs such as Seti I and Ramesses the Great, were buried rear the cleft of the rock which subjected to damage by floodwater (World Book, 2002). ...read more.

200 to 400 tourists used to visit The Valley daily and this number has increased to around 4, 000 to 5, 000 tourists daily. According to the Egyptian Ministry of Tourism, "25, 000 tourists will visit the site by 2015" (Tour Egypt, 1999). Few attempts have been implemented to solve the issues with tombs and the increasing number of tourists is threatening this chance. Tour guides now have to lecture outside the tomb where the tourists proceed into a single file through the tombs; this dramatically reduces the risk of damage. Some plans to help preserve The Valley include: installing fibre optic lighting, environmental controls to stop perspiration, systematic trash collection and an interpretative centre for visitors (Theban Mapping Project, 1997-09). CONCLUSION With the destruction caused by tomb robbers, flash flooding and careless human activities, The Valleys future may be uncertain but the promise of new discoveries continues to attract archaeologists from all over the world. A resting place for more than 60 Pharaohs, the Valley of the Kings' history is vital for the understanding of the civilisation that has greatly shaped the society today. If another royal tomb is still hidden then it will be a matter of time before it is brought to light; not only would it reveal treasures of materialism but treasures of information. ...read more.