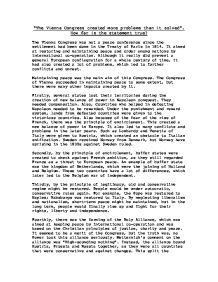 &quot;The Vienna Congress created more problems than it solved&quot; - How far is the statement true?

"The Vienna Congress created more problems than it solved". How far is the statement true? The Vienna Congress was not a peace conference since the settlement had been done in the Treaty of Paris in 1814. It aimed at restoring and maintaining peace and order among nations by international co-operation. Although it really did prevent a general European conflagration for a whole century of time, it had also created a lot of problems, which led to further conflicts and unrest. Maintaining peace was the main aim of this Congress. The Congress of Vienna succeeded in maintaining peace to some extent, but there were many other impacts created by it. Firstly, several states lost their territories during the creation of new balance of power in Napoleon conquest. They needed compensation. Also, Countries who helped in defeating Napoleon needed to be rewarded. Under the punishment and reward system, lands from defeated countries were given to the victorious countries. Also because of the fear of the rise of French, there was the principle of encirclement. ...read more.

The forming of the two camps had drawn many powers into the Crimean war in 1854, as conflict between any countries of the two camps will draw the supporting powers into it. Many powers were then pulled into the trouble water. It magnified the problems from internal into international scale. Lastly, although the powers seemed to have common aim in maintaining peace, they were basically based on their self-interest instead of maintaining real peace. This might led to the growth of ideological, political, and economic gap between the absolutist and moderate liberal-constitutionalist governments and groups. Such as Russia wanted Poland because she wanted warm seaport; Prussia wanted Saxony for its own expansion. But Austria and Britain wanted to maintain a balance of power and status quo in Europe. Therefore, they often objected the requests of Russia, which in turn let to mutual distrust among countries. Despite the numerous problems the Vienna Congress had created, it had successfully solved some problems created by Napoleonic conquest. ...read more.

Also, by encircling France, which was creating buffer states by strengthening states surrounded France, can prevent France from becoming too powerful and taking revenge. Balance of power can also be maintained. Such as joining of the Belgium and Holland to become the Kingdom of Netherlands; Piedmont was given the small states of Nice, Savoy and Genoa, and was united with Sardinia. Fourthly, the balance of power and status quo were maintained and upheld by the policy of reward and compensation. Such as, Austria received Lombardy and Venetia in Italy; Russia received Finland and part of Poland. By this, it embodied a moderate, sensible territorial settlement that satisfied the main needs and requirements of the victors without despoiling or humiliating France. No powers became too powerful to threaten peace. Peace had really been maintained for at least 50 years, and no major wars were fought. To conclude, the statement was true to a certain extent. The Congress of Vienna was a mixed blessing. Although it had created a lot of problems after a short period of peace, it at least really succeed in maintaining the peace for at least half a century, and solved the problems left by Napoleon. ...read more.