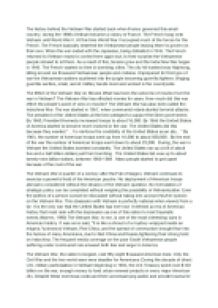 The Vietnam War - causes and effects.

﻿The history behind the Vietnam War started back when France governed this small country, during the 1890s Vietnam became a colony of France. The French hung onto Vietnam until World War II. At this time World War II occupied much of the forces for the French. The French basically deserted the Vietnamese people leaving them to govern on their own. When the war ended with the Japanese, being defeated in 1945. The French returned to Vietnam ready to control them again but, to their surprise the Vietnamese people refused to let them. As a result of this, tension grew and the Indochina War began in 1946. The French wasted no time in bombing cities. The city hit hardest was Haiphong, killing around six thousand Vietnamese people and civilians. Unprepared for this type of war the Vietnamese soldiers scattered into the jungle becoming guerrilla fighters. Waging guerrilla warfare, small, secret military bands lived and worked in the countryside. The Effect of the Vietnam War on Movies What has been the outcome of movies from the war in Vietnam? ...read more.

It defined an era of American history that most rank with the depression as one of this nation?s most traumatic events.(Warren, 1990) The Vietnam War, to me, is one of the most interesting wars in American history. It was once said, ?it is like a shroud of a mystery wrapped inside an enigma.?(unknown) Vietnam, Red China, and the spread of communism brought fear into the homes of many Americans, due to Red China and Russia tightening their strong hold on Indochina. The frequent media coverage on the poor South Vietnamese people suffering under communist rule aroused both fear and anger in America The Vietnam War, the nation's longest, cost fifty-eight thousand American lives. Only the Civil War and the two world wars were deadlier for Americans. During the decade of direct U.S. military participation in Vietnam beginning in 1964, the U.S Treasury spent over $140 billion on the war, enough money to fund urban renewal projects in every major American city. Despite these enormous costs and their accompanying public and private trauma for the American people, the United States failed, for the first time in its history, to achieve its stated war aims. ...read more.

The Vietnam War 1965-1975 The Vietnam War has sparked controversy for over five decades. I never knew enough about the war to have an opinion on it, but after I finished my research I came to the conclusion that much of this war was senseless and irresponsible. In the beginning the United States feared that Communism from foreign entities would trickle in the U.S. if given the chance. So when Viet Minh began a series of attacks on the French colonials in Vietnam, President Harry Truman authorized 15 million dollars in military aid to the French. Between 1965 and 1975, the American government dug themselves deeper and deeper into the war. America?s stand point focused on winning the war and proving that we went into this fight for a just cause rather than keeping out the Communists. With the growing popularity of the media and yellow journalism, the American people had a front row seat of what was occurring in the country that few knew much about. Many Americans initially were scared of the ?Domino Effect? of communism and in turn supported the war, but after the secrets, the thousands of soldiers and innocent people being killed their eyes were opened to the harsh realities that war brought forward. ...read more.