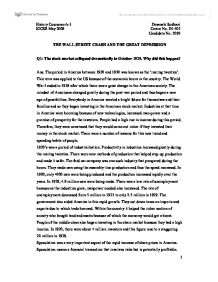 THE WALL STREET CRASH AND THE GREAT DEPRESSION

THE WALL STREET CRASH AND THE GREAT DEPRESSION Q1: The stock market collapsed dramatically in October 1929. Why did this happen? Ans: The period in America between 1920 and 1930 was known as the 'roaring twenties'. This term was applied to the US because of the economic boom in the country. The World War I ended in 1918 after which there was a great change in the American society. The mindset of Americans changed greatly during the post-war period and thus began a new age of possibilities. Everybody in America wanted a bright future for themselves and their families and so they began investing in the American stock market. Industries at that time in America were booming because of new technologies, increased man-power and a promise of prosperity for the investors. People had a high rise in income during this period. Therefore, they were convinced that they would come out richer if they invested their money in the stock market. There were a number of reasons for this new trend and spending habits of people. 1920's was a period of industrialization. Productivity in industries increased greatly during the roaring twenties. There were new methods of production that helped step-up production and made it safer. The ford car company was one such industry that prospered during the boom. They made cars using the assembly-line production and thus the speed increased. In 1900, only 4000 cars were being produced and the production increased rapidly over the years. In 1929, 4.8 million cars were being made. There was a low rate of unemployment because as the industries grew, manpower needed also increased. The rate of unemployment decreased from 5 million in 1921 to only 2.5 million in 1929. The government also aided America in this rapid growth. They cut down taxes on imports and exports due to which trade boomed. Within the country it helped the richer section of society who bought land and assets because of which the economy would get a boost. ...read more.

Just some days before the Wall Street crash, over-confident investors such as Charles E Mitchell said, "the industrial condition of the United States is absolutely sound." Another learned professor of Economics at the Yale University, Irvin Fisher stated, "Stock prices have reached what it looks like a permanently high plateau." This over-confidence was contrasted by a sudden selling of shares on 29th October that was the day of the crash. The crash was followed by a period of the great depression. The period between 1920 and 1929 was known as the 'roaring twenties' in America. The lifestyle of people had changed a lot during these years. As their income increased, their spending habits also changed. During these years, about one-third of the American population was investing in the American stock exchange. This is why they had a lot of disposable income. They invested in any company that they found promising. As a result, industries in America started producing goods in huge quantities. There were new technologies introduced because of which production grew rapidly. People bought the latest products by taking loans that were given very easily by banks. The system of credit cards was also introduced during this period of prosperity. The term 'buy now, pay later' became common amongst commoners. They would buy goods on credit and paid through instalment. However, when the depression began in America, people were forced to repay their loans and banks also started shutting down. Big industries had over produced according to demands which had decreased towards 1928. This was because people had already bought whatever they could afford. The surplus could not be exported to other countries because the prices of American goods were so high that Europeans couldn't afford them and when the excess wasn't sold, the companies began producing less. As a result, share prices started falling and investors lost interest in companies. These were the short-term causes that led to the great depression after the Wall Street crash. ...read more.

They would sleep in parks at night or build themselves untidy shanties. The effect of depression on children was quite different from what it was on elders. They took on responsibilities at an earlier age and tried to find jobs to support their families. A 12 year old boy in Chicago wrote to the president asking for help because he saw his father weeping and felt sorry for him. Thus children behaved more maturely and helped their families. The overall condition in America was bad because the economy had collapsed more than 60% of the population did not have money for their basic needs. The president of America, Herbert Hoover reassured people that the country would get back to its feet again and rise to prosperity. He cut down taxes even further and this encouraged people to buy more goods. By mid 1931 there was an increase in production and again it looked as if America was settling back again. However, the national income of the country fell from $59 billion to $42 billion by 1932. Important individuals such as Irving Fisher had stated that market would get stronger but just three days later it collapsed. He was left poor just as other Americans and people blamed him for his wrong forecasts. Charles E Mitchell, who was also an affluent American, was also left poor by the crash. He had bought shares when people were desperately selling them and finally he too ran out of money. He was also arrested for tax evasion during the depression period but eventually paid his debt by 1938. These were the harsh conditions that the Americans had to live with during the days of the great depression. Not only America but even countries such as Germany and Britain faced the slump. Unemployment was about 6 million in Germany and 3 million in Britain. Lives of people had changed greatly before America could recover from the terrible days of the depression. Sources: www.en ?? ?? ?? ?? History Coursework-1 Devanshi Sodhani IGCSE May 2008 Centre No. IN-405 Candidate No. 0293 1 ...read more.