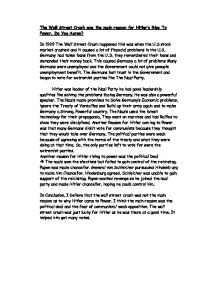 The Wall Street Crash was the main reason for Hitler's Rise To Power. Do You Agree?

The Wall Street Crash was the main reason for Hitler's Rise To Power. Do You Agree? In 1929 The Wall Street Crash happened this was when the U.S stock market crashed and it caused a lot of financial problems in the U.S. Germany had taken loans from the U.S, they remembered their loans and demanded their money back. This caused Germany a lot of problems Many Germans were unemployed and the Government could not give poeople unemployment benefit. ...read more.

The Nazis made promises to Solve Germany's Economic problems, ignore the Treaty of Versailles and Build up their army again and to make Germany a Strong, Powerful country. The Nazis used the latest technology for their propaganda, They went on marches and had Rallies to show they were disciplined. Another Reason for Hitler coming to Power was that many Germans didn't vote for communists because they thought that they would take over Germany. ...read more.

Papen was made chancellor. General von Schleicher pursuaded Hindenburg to make him Chancellor. Hindenburg agreed. Schleicher was unable to gain support of the reichstag. Papen wanted revenge so he joined the nazi party and made Hitler chancellor, hoping he could control him. In Conclusion, I believe that the wall street crash was not the main reason as to why Hitler came to Power. I think the main reason was the political deal and the fear of communism/ weak opposition. The wall street crash was just lucky for Hitler as he was there at a good time, It helped him get many votes. ...read more.