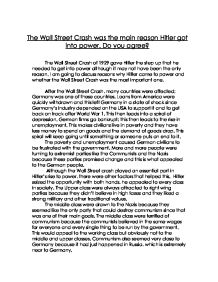 The Wall Street Crash was the main reason Hitler got into power. Do you agree?

The Wall Street Crash was the main reason Hitler got into power. Do you agree? The Wall Street Crash of 1929 gave Hitler the step up that he needed to get into power although it may not have been the only reason. I am going to discuss reasons why Hitler came to power and whether the Wall Street Crash was the most important one. After the Wall Street Crash, many countries were affected; Germany was one of these countries. Loans from America were quickly withdrawn and this left Germany in a state of shock since Germany's industry depended on the USA to support it and to get back on track after World War 1. This then leads into a spiral of depression. German firms go bankrupt; this then leads to the rise in unemployment. This makes civilians live in poverty and they have less money to spend on goods and the demand of goods drop. ...read more.

The middle class were terrified of communism because the communists believed in the same wages for everyone and every single thing to be run by the government. This would appeal to the working class but obviously not to the middle and upper classes. Communism also seemed very close to Germany because it had just happened in Russia, which is extremely near to Germany. Hitler used the fact that people were unemployed and starving to boost his own success, he offered the unemployed jobs in the S.A. This was highly successful because the uniforms gave the unemployed a sense of belonging and it made them feel as if they had a purpose. He also offered food; this attracted the working class, which normally would have more likely to vote Communist. The Nazis use propaganda such as posters and promises saying that they will get Germany back on track. ...read more.

Then Papen wanted revenge and thought that he could use Hitler to gain power for himself. They made a deal where Hitler would be chancellor with Papen as his vice. Hidenburg then agreed to their plan because he and Papen thought they could control Hitler. They made sure that only 3 out of 12 people in the government were Nazis. It didn't take long for Hitler to abolish their plan and turn Weimar Republic into a dictated country. In conclusion, I think that the Wall Street Crash played a key part in Hitler's rise to power but it wasn't the only one, the fact that the opposition was extremely weak was also an essential part. In my opinion, the civilian of Germany only gave Hitler the support he needed because they were desperate and had to put their faith in someone who was likely to lead them to a better quality of living. ?? ?? ?? ?? ...read more.