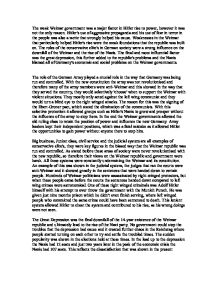 The weak Weimar government was a major factor in Hitler rise to power, however it was not the only reason.

The weak Weimar government was a major factor in Hitler rise to power, however it was not the only reason. Hitler's use of aggressive propaganda and his use of fear in terror in the people was also a tactic that strongly helped his cause. Weaknesses in the Weimar that particularly helped Hitler's rise were the weak foundations that the republic was built on. The roles of the conservative elite's in German society were a strong influence on the downfall of the Weimar and the rise of the Nazis. The final and most influential factor was the great depression, this further added to the republic's problems and the Nazis blamed all of Germany's economic and social problems on the Weimar governments. The role of the German Army played a crucial role in the way that Germany was being run and controlled. With the new constitution the army was not revolutionised and therefore many of the army members were anti-Weimar and this showed in the way that they served the country, they would selectively 'choose' when to support the Weimar with violent situations. They mostly only acted against the left wing communist and they would turn a blind eye to the right winged attacks. The reason for this was the signing of the Ebert-Groner pact, which stated the elimination of the communists. With this selective protection it allowed groups such as Hitler's Nazis to grow and prosper without the influence of the army to stop them. In the end the Weimar governments allowed the old ruling class to retain the position of power and influence the new Germany. Army leaders kept their independent positions, which was a fatal mistake as it allowed Hitler the opportunities to gain power without anyone there to stop him. Big business, Junket class, civil service and the judicial system are all examples of conservative elite's, they were key figures in the biased way that the Weimar republic was run and controlled. ...read more.

Hitler's philosophy of extreme German Nationalism was translated into the creation of the Nazi Movement whereby Hitler galvanised people into following his views and beliefs that led to pure Right Wing philosophy. Foreigners, Jews, Gypsies were all excluded as being inferior and he gradually persuaded people to adopt extreme nationalistic beliefs, where by only pure German Aryan people counted, Hitler got his way with people at huge public meetings known as rallies, at these rallies his magnetic personality was able to hypnotise the crowd, who would then follow his views and terms. The adoration of the people elevated him to total leadership so what ever his policies were people followed. A very important cause, in my opinion was Hitler's oratory, personality and leadership skills. It was the backbone of all the causes as it got him where he wanted to be. If this cause was not used it could of jeopardized Hitler's future enormously. It showed that he utilised the strengths that he had to the best of his abilities that added to him gaining popularity. Hitler was very confident in himself. He was assertive, aggressive and arrogant. Despite all this thousands of people would turn up at his rallies. He manipulated people into extreme Nationalistic beliefs. Hitler was the Dictator of Germany. It seemed he was on a winning streak that nobody could stop. The importance of Hitler's oratory personality and leadership had the biggest impact overall in Germany. Although without the right circumstances it would have not been as big an effect on Hitler's power as it was. Hitler's words were the stepping-stones for the present but would the words become the hell of the future. Break Hitler one of the 20th century's most powerful dictators, he gained power through positive reasons and negative reasons. He had an appeal to every type of German, women, the middle-class, young men and the unemployed. ...read more.