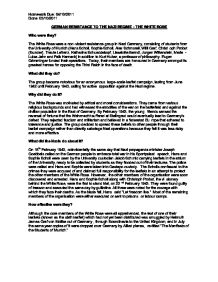 The White Rose Movement. The White Rose were a non-violent resistance group in Nazi Germany, consisting of students from the University of Munich

GERMAN RESISTANCE TO THE NAZI REGIME - THE WHITE ROSE Who were they? The White Rose were a non-violent resistance group in Nazi Germany, consisting of students from the University of Munich (Hans Scholl, Sophie Scholl, Alex Schmorell, Willi Graf, Christoph Probst (founder), Traute Lafrenz, Katharina Schueddekopf, Lieselotte Berndl, Jurgen Wittenstein, Marie-Luise Jahn and Falk Harnack) in addition to Kurt Huber, a professor of philosophy. Eugen Grimminger funded their operations. Today, their members are honoured in Germany amongst its greatest heroes for opposing the Third Reich in the face of death. What did they do? The group became notorious for an anonymous large-scale leaflet campaign, lasting from June 1942 until February 1943, calling for active opposition against the Nazi regime. ...read more.

They rejected fascism and militarism and believed in a federated Europe that adhered to tolerance and justice. The group decided to spread these beliefs to other people through their leaflet campaign rather than directly sabotage Nazi operations because they felt it was less risky and more effective. What did the Nazis do about it? On 18th February 1943, coincidentally the same day that Nazi propaganda minister Joseph Goebbels called on the German people to embrace total war in his Sportpalast speech, Hans and Sophie Scholl were seen by the University custodian Jakob Schmid carrying leaflets in the atrium of the University, ready to be collected by students as they flooded out of their lectures. ...read more.

They were found guilty of treason and executed the same day by guillotine. All three were noted for the courage with which they face their deaths. As the blade fell, Hans said "Let freedom live." Most of the remaining members of the organisation were either executed or sent to prisons or labour camps. How effective were they? Although the core members of the White Rose were all apprehended, the text of one of their leaflets (known as the sixth leaflet) which had not yet been distributed was smuggled by Helmuth James Graf von Moltke out of Germany , through Scandinavia to the United Kingdom, and in July the same year copies of it were dropped over Germany by Allied planes, re-titled "The Manifesto of the Students of Munich." ?? ?? ?? ?? Homework Due: 04/10/2011 Done: 03/10/2011 ...read more.