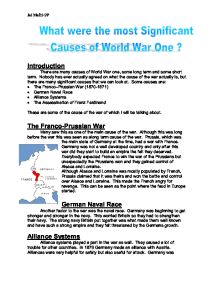 There are many causes of World War one, some long term and some short term

Introduction There are many causes of World War one, some long term and some short term. Nobody has ever actually agreed on what the cause of the war actually is, but there are many significant causes that we can look at. Some causes are: * The Franco-Prussian War (1870-1871) * German Naval Race * Alliance Systems * The Assassination of Franz Ferdinand These are some of the cause of the war of which I will be talking about. The Franco-Prussian War Many saw this as one of the main cause of the war. Although this was long before the war this was seen as along term cause of the war. Prussia, which was the main state of Germany at the time, had a war with France. ...read more.

The strong navy Britain put together was what made them well known and have such a strong empire and they felt threatened by the Germans growth. Alliance Systems Alliance systems played a part in the war as well. They caused a lot of trouble for other countries. In 1879 Germany made an alliance with Austria. Alliances were very helpful for safety but also useful for attack. Germany was worried about France attacking and Austria needed protection from the Russians, as a result of this Germany and Austria made an alliance with each other. By 1900 the British were worried about other countries in Europe such as; France, Germany who both had allies and an empire. ...read more.