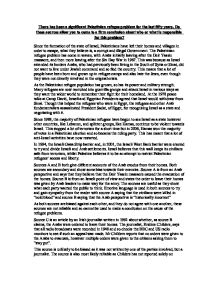 There has been a significant Palestinian refugee problem for the last fifty years. Do these sources allow you to come to a firm conclusion about who or what is responsible for this problem?

There has been a significant Palestinian refugee problem for the last fifty years. Do these sources allow you to come to a firm conclusion about who or what is responsible for this problem? Since the formation of the state of Israel, Palestinians have left their homes and villages in order to escape, what they believe is, a corrupt and illegal Government. The Palestinian refugee problem has come in waves, with Arabs initially leaving after the Deir Yassin massacre, and then more leaving after the Six Day War in 1967. This was because as Israel extended its borders Arabs, who had previously been living in the South of Syria or Sinai, did not want to live under Jewish command and so fled the country. This means that a lot of people have been born and grown up in refugee camps and also hate the Jews, even though they were not directly involved in the original crisis. As the Palestinian refugee population has grown, so has its power and military strength. Many refugees are now recruited into guerrilla groups and attack Israel in various ways as they want the wider world to remember their fight for their homeland. At the 1978 peace talks at Camp David, Israeli and Egyptian Presidents agreed that Israel would withdraw from Sinai. ...read more.

This is probably a primary source, though we have no proof as a date is not given. It is likely to be biased towards the Arab point of view, though it does stay relatively neutral by admitting the UN tried to help them. This would make it quite reliable. The source has use as it allows historians to see another view of why the Palestinians stayed as refugees. This reason is that the majority of them refused to go into houses provided for them, thereby making them refugees by their own choice. The source was created from an interview with refugees so it is unlikely to have a hidden agenda, though it may do as the comments are made by Palestinians. Source E is a primary source and is a record of a speech given to the UN by the Israeli ambassador, Abba Eban, in 1958. Mr Eban says that the Arabs are only refugees because other Arab countries had had an economy boom and did not want to share their wealth with the refugees. He finishes by saying that although there is room in the Arab world for the refugees no one wants them, not because there is not room. This source is biased from an Israeli point of view as it is a primary source, meaning that the situation has only just begun. ...read more.

In conclusion, although a variety of sources have been presented for evaluation, it is hard to make a clear decision on who is to blame for the crisis. The only sources that can be considered are sources C and G, as biased sources cannot be used in making a fair judgement. However, the fact that source G does not reach a conclusion means it cannot be used. Therefore, only source C can be used to answer the question. This means a firm conclusion cannot be made as information from more than one source is needed. Although the Jews could be blamed, as they forced the Arabs out of their homeland, so too could the Palestinians who refused to settle in other lands or other Arab countries who may have refused them houses. Another problem on deciding who to blame for the crisis is the amount of bias in the sources. As the conflict has been going on for so long, the majority of the sources cannot be fully believed as the writers will have had interest and feelings about the conflict. As the crisis continues even to this day, it is likely that a mixture of causes (both long and short term) made the Palestinians evacuate their homeland, and so no one factor can be completely blamed for it. ...read more.