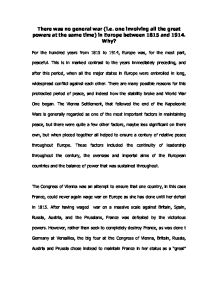 There was no general war (i.e. one involving all the great powers at the same time) in Europe between 1815 and 1914. Why?

There was no general war (i.e. one involving all the great powers at the same time) in Europe between 1815 and 1914. Why? For the hundred years from 1815 to 1914, Europe was, for the most part, peaceful. This is in marked contrast to the years immediately preceding, and after this period, when all the major states in Europe were embroiled in long, widespread conflict against each other. There are many possible reasons for this protracted period of peace, and indeed how the stability broke and World War One began. The Vienna Settlement, that followed the end of the Napoleonic Wars is generally regarded as one of the most important factors in maintaining peace, but there were quite a few other factors, maybe less significant on there own, but when pieced together all helped to ensure a century of relative peace throughout Europe. These factors included the continuity of leadership throughout the century, the overseas and imperial aims of the European countries and the balance of power that was sustained throughout. The Congress of Vienna was an attempt to ensure that one country, in this case France, could never again wage war on Europe as she has done until her defeat in 1815. After having waged war on a massive scale against Britain, Spain, Russia, Austria, and the Prussians, France was defeated by the victorious powers. ...read more.

The domestic focus of Germany was squarely on unification, and this ensured that Prussia did not look too far beyond her own borders, with the notable exception of the conquest of Alsace and Lorraine from the French in 1871-2. This dispute was a localized affair, and never seriously threatened the international order. The same can be said of the small military entanglements between a number of the states from 1854-70. These wars were short and decisive, ending in defeats for Austria and France.7 Again, the defeated countries maintained their great power status, ensuring a continuing status quo. The stability of France, whose monarchy was restored in 1815, was also significant8 The rulers and leaders of the great powers were also in close contact at this time, and many were indeed related. There were family ties between the monarchies of Russia, Britain and the unified Germany. These rulers regarded the treaties that were signed in this period, as personal, and binding, and it was a matter of personal honour to ensure they were upheld. This "autocratic alliance" served to ensure stability amongst the powers.9 The Nineteenth Century saw many of the European powers look overseas to expand their empires. Africa, the Near and Far East, and parts of Asia were colonised by explorers and missionaries from Britain, France, Germany, and even the smaller nations like Holland and Belgium. ...read more.