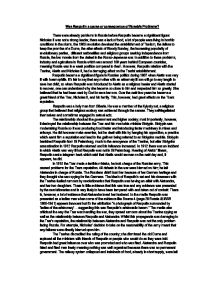 There were many causes of the Bolshevik Revolution. Which do you consider to be the most important?

Was Rasputin a cause or consequence of Russia's Problems? There were already problems in Russia before Rasputin became a significant figure: Nicholas II was not a strong leader, there was a lack of food, a lot of people were living in horrific conditions in the slums, the 1905 revolution devalued the establishment of Tsarism, the failure to keep the promise of a Duma, the after effects of Bloody Sunday, the increasing popularity of revolutionary parties, different nationalities and religious groups seeking independence from Russia, the low morale from the defeat in the Russo-Japanese war. In addition to these problems, industry and agriculture in Russia which was around 100 years behind European countries, meaning Russia was in a weak position compared to them. However, Rasputin relation with the Tsarina, Alexis and Nicholas II, had a damaging effect on the Tsarist establishment. Rasputin became a significant figure in Russian politics during 1907 when Alexis was very ill with haemophilia. It's fair to say that any mother with an extremely ill son will go to any length to save her child, so when Rasputin was introduced to Alexis ...read more.

All defeats in the war were blamed on him; he left Alexandra in charge of Russia. The Russians didn't trust her because of her German heritage and they thought she was spying for the Germans. The idea's of Rasputin's set and his closeness with the Tsarina fuelled rumours by revolutionaries that Rasputin was having an affair with Alexandra, and her two daughters. There is little evidence that this was true and any evidence was presented by the revolutionaries and is very likely to have been tampered with and taken out of context. There is, however, a lot of evidence that Alexandra loved her husband. In the media Rasputin was presented as a ladies man when some of the evidence like Source 4 (page 28 Russia &USSR 1905-1941) appears innocent but it's the attribution "A photograph of Rasputin surrounded by 'ladies of the aristocracy'... suggesting this was Rasputin's aristocratic harem." The media also criticised the way the Tsar was handling the war, they spread rumours about the Tsarina spying as well as the relationship between Rasputin and Alexandra. ...read more.

Thus, it was not only because of Rasputin's presence in the court that there were problems, it was also the way Nichols reacted to the rumours that led to a lack of respect and fuelled dissatisfaction for the Tsar's rule. Rasputin's presence in the politics of Russia did cause problems for Tsar Nicholas II because he was not respected, being a holy man from Siberia. Rasputin's low birth and rural origins meant that ministers became aggravated by his quick ascension into power and influence over major decisions. Although Rasputin appears to have helped prolonged the life of Alexis, his association with the Tsarina caused yet more problems for Nicholas. Rumours and anti-Tsarist propaganda stemmed from this relationship but Nicholas' reaction caused as many problems as the rumours originally did. There were also many problems in Russia preceding Rasputin's involvement as the 1905 revolution demonstrates. In the aftermath of the Russo-Japanese war and Bloody Sunday, and with a nationwide famine and dreadful living conditions for those working in the cities, the level of dissatisfaction would have inevitably led to further problems in Russia regardless of Rasputin's involvement. ?? ?? ?? ?? ...read more.