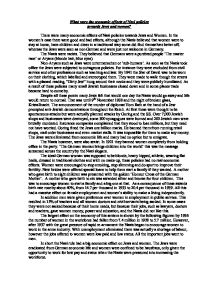 What were the economic effects of Nazi policies towards Jews and women? There were many economic effects of Nazi policies towards Jews and Women. In the women's case there were good and bad effects, although the Nazis believed that women were to stay at home, have children and dress in a traditional way some did find themselves better off, whereas the Jews were seen as non-German and were just not welcome in Germany. The Nazis were racists. They believed that Germans were a purebred people 'The master race' or Aryans (blonde hair, blue eyes). Non-Aryans such as Jews were untermenschen or 'sub-humans'. As soon as the Nazis took office the Jews were subjected to outrageous policies. For instance they were excluded from civil service and other professions such as teaching and law. ...read more.

Insurance companies complained that they stood to lose millions, but they need not have worried. Goring fined the Jews one billion marks. He banned them from running retail shops, mail order businesses and even market stalls. It was impossible for them to make any money. The Jews were eliminated from economic life and many had no option but to emigrate. The Nazis however, were also sexist. In 1921 they banned women completely from holding office in the party. 'The German woman brings children into the world' this was the message screamed across the country by the Nazi slogans. The ideal German woman was supposed to be blonde, heavy hipped, athletic, wearing flat heels, dressed in traditional clothes and with no make-up, these policies had no real economic effects. ...read more.

The largest effect on the economy of this sexism is shown by the following figures: by 1936 the number of women in the workforce had fallen from 7.4 million in 1928 to 5.7 million. However, after 1937 with the great pressure of rapid re-armament the Nazis began to encourage women to work in the arms industry. With unemployment eliminated there was actually a shortage of labour, however the jobs offered to women were low paid and low status. All the important jobs went to men. In short the Nazi rule had a big economic effect on Jews and women. The Jews were eradicated from German economic life and women were confined to be hausfraus, only given the opportunity to work for low pay and status when the Nazis were pressured into increasing the workforce. ...read more.