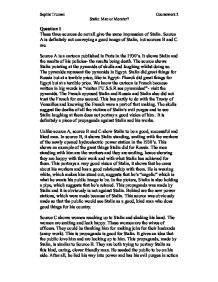 These three sources do not all give the same impression of Stalin. Source A is definitely not conveying a good image of Stalin, but sources B and C are.

Question 1 These three sources do not all give the same impression of Stalin. Source A is definitely not conveying a good image of Stalin, but sources B and C are. Source A is a cartoon published in Paris in the 1930's. It shows Stalin and the results of his policies- the results being death. The source shows Stalin pointing at the pyramids of skulls and laughing whilst doing so. The pyramids represent the pyramids in Egypt. Stalin did great things for Russia but at a terrible price, like in Egypt- Pharoh did great things for Egypt but at a terrible price. We know the cartoon is French because written in big words is "visitez l'U.S.S.R ses pyramides!"- visit the pyramids. The French opposed Stalin and Russia and Stalin also did not trust the French for one second. This has partly to do with the Treaty of Versailles and knowing the French were a part of that making. The skulls suggest the deaths of all the victims of Stalin's evil purges and to see Stalin laughing at them does not portray a good vision of him. It is definitely a piece of propaganda against Stalin and his works. Unlike source A, source B and C show Stalin to be a good, successful and liked man. In source B, it shows Stalin standing, smiling with the workers of the newly opened hydroelectric power station in the 1930's. This shows an example of the great things Stalin did for Russia. The men standing with him are the workers and they are smiling, hence showing they are happy with their work and with what Stalin has achieved for them. This portrays a very good vision of Stalin, it shows that he cares about his workers and has a good relationship with them. He is wearing white, which makes him stand out, suggests that he's "angelic" which is what he wants his public image to be. ...read more.

Source L, written in 1974, states that Stalin was a good politician- "Stalin was very skilled, indeed gifted politician, and one of the greatest political figures of the twentieth century." The source then carries on to say how he was a good politician, but had an evil dark side- "he had a dark and evil side to his nature". This source therefore concludes that Stalin was a great politician, but had a dark evil side to him. It "does not make him a good man", according to the source. Stalin did do great things for Russia. He developed it into a great powerful state, but at a great cost of many innocent lives, which is definitely the wrong way to go about developing a country. Source M does not contradict source L, but it does not agree that Stalin was a good politician. It states that he was simply pure evil and that "power turned a ruthless politician into a monstrous tyrant (dictator)". This source says that he was a power hungry dictator, which is true. During the show trials, Stalin was basically the only person who had a say in anyone's case. Stalin controlled the people of Russia. He dictated them. Unlike source L, this source clearly agrees that Stalin was a good politician. "the terror was necessary, not only to keep men obedient, but even more so to make them believe in him". This is true because we know that from the show trials, people were frightened of Stalin, and if they were to even think about putting a foot out of line, they would be killed. People had to "obey" Stalin otherwise they would have to face death. This source talks about how evil Stalin was. The second source that says Stalin was a great politician but a bad person was written in 1983. The source that states that Stalin was pure evil was published in 1974. ...read more.

He's saying that the bad things he did was only for the good of the country in a very polite way so that he won't offend the party members who Stalin worked so closely with Stalin. This source is quite balanced. It is saying that Stalin did use terror, but it was for the good of the country. Source L is also quite balanced. It begins by saying that Stalin was a "skilled, indeed gifted politician, and one of the greatest political figures of the twentieth century", but then says that all of this "does not make him a good man". So this source recognises all of Stalin's achievements and good qualities, but then says it can't justify his evil nature. The end of the source says "He had a dark and evil side to his nature". The beginning of the source suggests he's a man, but the end says he's a monster". This source is balanced. It was a biography published in 1983 in Britain. This source is probably the most genuine, because it doesn't take a biased approach, there was no threat of communism and there was freedom of speech in 1983 in Britain. Stalin can be perceived as a man or a monster or a combination of the two. From using my own knowledge and by studying these sources, I have come to the conclusion that he was more of a monster than a man but was a great political leader and did great things for Russia, just the way he went about doing them were absurd. The sources against Stalin were mainly French and American which isn't reliable at all because they were both strongly against communism and Stalin. The sources which was biased for Stalin even in some way leaned towards the monster category in some way. By using my own knowledge on Stalin's purges along with the great things he did for Russia, I think that Stalin did great things for Russia but they way he went about it was immoral and inhumane. Question 8 ?? ?? ?? ?? Sophie Truman Coursework 2 Stalin: Man or Monster? ...read more.