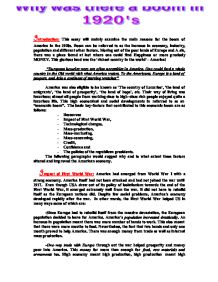 This essay will mainly examine the main reasons for the boom of America in the 1920s.

Introduction: This essay will mainly examine the main reasons for the boom of America in the 1920s. Boom can be referred to as the increase in economy, industry, population and different other factors. Moving out of the poor lands of Europe and Asia, there was a place found at last where one could find Happiness or more precisely MONEY. This glorious land was the 'richest country in the world'- America! "European luxuries were are often necessities in America. One could feed a whole country in the Old world with what America wastes. To the Americans, Europe is a land of paupers, and Asia a continent of starving wretches" America was also eligible to be known as 'The country of Luxuries', 'the land of emigrants', 'the land of prosperity', 'the land of hope', etc. Their way of living was luxurious; almost all people from working class to high-class rich people enjoyed quite a luxurious life. This high economical and social developments in referred to as an "economic boom". The basic key-factors that contributed to this economic boom are as follows: - Resources - Impact of First World War, - Technological changes, - Mass-production, - Mass-marketing, - Mass-consuming, - Credit, - Confidence and - The policies of the republican presidents. ...read more.

Hence, production increased increasing the American economy in turn. Hence, this proved to be yet another factor for the economic boom in the 1920s. Technological changes: The 1920s was a period of great technological developments. Technology showed its full advance by means of plastic and Bakelite production for domestic purposes, conveyor belts, automatic switchboards, glass tubing, etc. One other major industry that developed due to the technological growth was the electrical industry. Electricity provided cheap and more efficient power supply to the factories. By 1927 sixty three percent of houses in the United States had electrical power. It also led to the production of new consumer goods like refrigerators, radios and vacuum cleaners. With a variety of goods produces, the market for the variety increased. People who did not want to spend much of their time in household were huge. The invention of vacuum cleaners and domestic goods, which reduced work, attracted the public towards it. Hence, they provided a major part of the income, which meant that they indirectly played a role in the boom. Mass-production: Mass-production or large-scale production of goods needed technology, which was sufficiently available in America. The work of Henry Ford in the production of automobiles created a technological revolution in the industrial world. ...read more.

This was the contribution of confidence to the economic boom. The policies of the Republican presidents: 'A car in every garage and a chicken in every pot'. This was the aim of American politicians in the 1920s. They did three things to bring their aim to action: -Lowered taxes on the profit allowing money to be invested on industry. -Implied tariffs on imported goods. This reduced the importing of goods and gave opportunity for American goods to be marketed and develop. -Non-interference over financial institutes or business. The boom: These above-mentioned factors led to the economic boom in the 1920s. Once the economic boom started, it developed by itself. All the causes of the boom were interconnected. Consequences of the Boom: On analysing the consequences of the boom, it can be said that the advantages from the boom overruled the disadvantages. Advantages Disadvantages. - Economy increased US was isolated -US became the richest country in the world Migration caused population problems -Unemployment decreased Already existent wage problems increased -Majority of the population was benefited Moral discipline of the society decreased due to Sex and cinema. Conclusion: Last but not least, it would be worth while to say that the boom in US all started from the Impact of the first World War and improved itself with the help of different factors like new technology, Mass production, mass marketing and at last mass consuming! Preethi Kumar, Grade 9. ...read more.