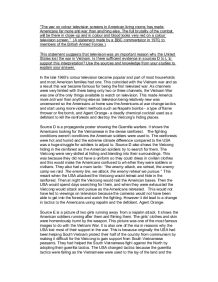 This statement suggests that television was an important reason why the United States lost the war in Vietnam. Is there sufficient evidence in sources D to L to support this interpretation? Use the sources and knowledge from your studies to explain your a

"The war on colour television screens in American living rooms has made Americans far more anti war than anything else. The full brutality of the combat will be there in close-up and in colour and blood looks very red on a colour television screen." (A statement made by a BBC commentator in 1970, to members of the British Armed Forces.) This statement suggests that television was an important reason why the United States lost the war in Vietnam. Is there sufficient evidence in sources D to L to support this interpretation? Use the sources and knowledge from your studies to explain your answer. In the late 1960's colour television became popular and part of most households and most American families had one. This coincided with the Vietnam war and as a result this war became famous for being the first televised war. As channels were very limited with there being only two or three channels, the Vietnam War was one of the only things available to watch on television. This made America more anti war than anything else as television being relatively new was uncensored so the Americans at home saw the Americans at war change tactics and start using more violent methods such as Napalm bombs- a type of flame thrower or fire bomb, and Agent Orange- a deadly chemical cocktail used as a defoliant to kill the rainforests and destroy the Vietcong's hiding places. ...read more.

This source is a piece of writing by Richard Hamer, an American journalist, writing in 1970. This source is talking about the dilemma faced by the American soldiers. It describes what the soldiers witnessed as it describes walking down the road and there being dead men and people screaming with limbs blown off. At the beginning of the piece it is quite sympathetic as it describes the dilemma faced as the soldiers have to decide whether to kill one peasant or none as they will not be able to find out who threw the mortar. However it is anti war as it says; "one does not use napalm on villages and hamlets sheltering civilians...if one is attempting to persuade these people of the righteousness of one's cause"; which shows that Hamer is against the American soldiers' tactics. The tone he uses is quite patronising and mocking showing that he disagrees and thinks that their tactics are illogical, because they are trying to show that their cause is right by blowing up villages and injuring innocent civilians. I do not think that this would have linked to television helping America lose the Vietnam War as this is a piece of writing, and would have not been seen by millions of people on a screen. Source G is the reactions in 1968 of an American soldier after having just been told about the massacre of 347 unarmed civilians at My Lai. ...read more.

This number was reduced to 39 percent in October 1969, showing that the public were starting to disagree with the war and then in October 1970, 42 percent of Australians wanted the soldiers to carry on. This shows that although in April 1969 the majority of Australians wanted the troops to carry on fighting by October not a lot of people wanted the war to carry on and although a year later more people wanted the war to carry on half the population still wanted it to end. This shows that television had an impact on the public's opinion because they wouldn't have been able to form a decision, if they hadn't of viewed the war on television. In conclusion, although television wasn't a huge issue in the sources, as the majority of them were for none televised Medias, it played an important part in helping America lose the Vietnam War. This is because millions of people saw the true horrors of the war, such as the napalm attacks. This would have lead to massive outrage about the Vietnam War in many countries. The fact television was widely uncensored, would not have helped as Americans would have seen more bloodshed, then in the modern current day. Therefore television was very important, but so were none televised Medias, as they helped weight America's anti war attitude by being accessed by the few people who did not own a television. Holly-Maria Crompton http://www.library.kent.edu/page/11247 http://www.learnhistory.org.uk/vietnam/ustactics.htm ...read more.