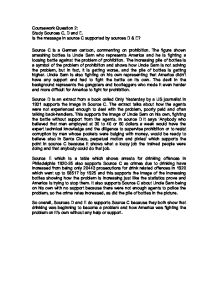 Three sources on Prohibition. Source C is a German cartoon, commenting on prohibition.

Is the message in source C supported by sources D & E?

Source C is a German cartoon, commenting on prohibition. The figure shown smashing bottles is Uncle Sam who represents America and he is fighting a loosing battle against the problem of prohibition. The increasing pile of bottles is a symbol of the problem of prohibition and shows how Uncle Sam is not solving the problem, but in fact, it is getting worse, and the pile of bottles is getting higher. Uncle Sam is also fighting on his own representing that America didn’t have any support and had to fight the battle on its own. The devil in the background represents the gangsters and bootleggers who made it even harder and more difficult for America to fight for prohibition.

Source D is an extract from a book called Only Yesterday by a US journalist in 1931 supports the image in Source C. The extract talks about how the agents were not experienced enough to deal with the problem, poorly paid and often talking back-handlers. This supports the image of Uncle Sam on his own, fighting the battle without support from the agents. In source D it says ‘Anybody who believed that men employed at 30 to 40 or 50 dollars a week would have the expert technical knowledge and the diligence to supervise prohibition or to resist corruption by men whose pockets were bulging with money, would be ready to believe also in Santa Claus, perpetual motion and pixies’ which supports the point in source C because it shows what a lousy job the trained people were doing and that anybody could do that job.

Source E which is a table which shows arrests for drinking offences in Philadelphia 1920-25 also supports Source C as crimes due to drinking have increased from being only 20443 prosecutions for drink related offences in 1920 which went up to 58517 by 1925 and this supports the image of the increasing bottles showing how the problem is increasing just like the statistics prove and America is trying to stop them. It also supports Source C about Uncle Sam being on his own with no support because there were not enough agents to police the problem, so the crime rates increased, as did the pile of bottles in the picture.

So overall, Sources D and E do supports Source C because they both show that drinking was beginning to become a problem and how America was fighting the problem on it’s own without any help or support.