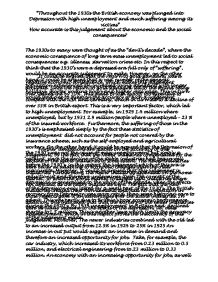 &quot;Throughout the 1930s the British economy was plunged into Depression with high unemployment and much suffering among its victims&quot; How accurate is this judgement about the economic and the social consequences?

"Throughout the 1930s the British economy was plunged into Depression with high unemployment and much suffering among its victims" How accurate is this judgement about the economic and the social consequences? The 1930s to many were thought of as the "devil's decade", where the economic consequence of long term mass unemployment led to social consequences: e.g. idleness, starvation crime etc. In this respect to think that the 1930's were a depressed era full only of "suffering", would be an accurate judgement to make. However, on the other hand it could be argued that a vast number of the general population experienced an increased living standard, with longer holidays, shorter working hours and higher real wage. This in turn would lead one to question the accuracy of such a judgement. It could be argued that the return to gold standard, was a negative economic consequence, which makes this judgement accurate. Since the return to gold standard led to the Pound being over valued the by 10%. This made British export too expensive to compete with the USA and Germany, which in turn led to a decline of over 33% in British export. This is a very important factor, which led to high unemployment. For example, in 1929 1.4 million where unemployed, but by 1931 2.9 million people where unemployed - 23 % of the insured workforce. Furthermore, the suffering of those in the 1930's is emphasised simply by the fact these statistics of unemployment did not account for people not covered by the insurance scheme, such as the self-employed and agricultural workers. ...read more.

Take for example, the steel industry, which showed more capacity for recovery than the other stable industries, which enabled production rose within this industry to rise steadily during the 1930's. The notion that mass unemployment was not so much structural as self-inflicted makes the accuracy of this judgement questionable. Since it suggests that the economic depression was not main cause of unemployment , but people's unwillingness to take up jobs that were available. Benjamin and Kochan argue that the jobs were available but the difference between the pay and the dole was to small to attract worker to them. Unemployment benefits were "on a more generous scale than ever before, or since", which suggests that the unemployed cold be picky in their job search. This notion is support by figures, which show that the ratio of benefit to wage was 0.49 during the 1930's and 0.57 in 1936. However, Hatton has challenged his argument, by claiming that the proportion of benefit to wage to be 0.3, rising to the maximum of 0.41 in 1936. Taking into account that women and young people would be eligible only to lower rates. This therefore suggest that such figures could hardly have been an incentive not to accept whatever work was available. This explanation of high unemployment seems to be less persuasive as the economic structure explanation of mass unemployment, and there for the accuracy of this judgement remands strong. ...read more.

This woman's case signifies the suffering of people during the 1930's, and therefore in that respect the judgement that has been made is proven to be accurate. On the other hand it could be argues that, the woman's death saw self inflicted, since the woman had enough food to survive, and there has the Depression was not really the cause of her suffering or death. In this respect the judgement made is inaccurate. The Depression had a profound negative social consequence on the metal health of many of the unemployed. The unemployed had "nothing to do with their time, nothing to spend ; nothing to do tomorrow, nor the day after." This was the type of thinking that often led to psychological effects such as helplessness and lack of self worth, an ultimately a lack of the will to live. However, it could be argued that at least the Cinema offer some type of escape from their lives, even if only temporary, which became very popular in the 1930's receiving up to 10,000 million visits annually. The fact that that the judgement made did not take into consideration possible factor that could ease the suffering of the unemployed, makes it in that respect limit in accuracy. However, it could said that popularity of the cinema was not the indication of an improved life, but an indication to the increased suffering of the unemployed that just fuelled their need of a form of escapisms even my means of death or cheap entertainment, i.e. the cinema. . ...read more.