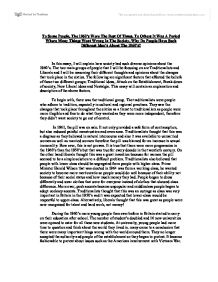 To Some People, The 1960s Were The Best Of Times, To Others It Was A Period Where Many Things Went Wrong In The Society, Why Do People Have Such Different Ideas About The 1960s?

To Some People, The 1960's Were The Best Of Times, To Others It Was A Period Where Many Things Went Wrong In The Society, Why Do People Have Such Different Idea's About The 1960's? In this essay, I will explain how society had such diverse opinions about the 1960's. The two main groups of people that I will be focusing on are Traditionalists and Liberals and I will be reasoning their different thoughts and opinions about the changes that took place in the sixties. The following are significant factors that affected the beliefs of these two different groups: Traditional ideas, Attack on the Establishment, Break down of society, New Liberal ideas and Nostalgia. This essay will contain an explanation and description of the above factors. To begin with, there was the traditional group. The traditionalists were people who adhere to tradition, especially in cultural and regional practises. They saw the changes that took place throughout the sixties as a threat to traditionalism as people were more illegible and free to do what they wanted as they were more independent, therefore they didn't want society to go out of control. In 1961, the pill was on sale. It not only provided a safe form of contraception, but also reduced painful menstruation and even acne. ...read more.

Many people found it hysterical, how ever some described it as a very bad taste as it was anti-authority, anti-religious and anti-patriotism. More over, a magazine called "OZ" was prosecuted for an outrageous rude cartoon of Rupert the bear. Traditionalists thought that this was shameful as they thought that people should not be allowed to question monarchy and church let alone make fun of them. On the other hand, liberals thought that it was hysterical and it was just a bit of fun for entertainment. The 1960's could be described as the break down of society as it was a period of time where the public became more rebellious. An example of this would be the youth culture as explained in essays one and two. Many argued that although women had more power and that they were allowed to work, divorce and have equal wrights with men, some concluded that they didn't take control of the children as they were never home to look after them as they were at work. One may say that this lead children to become a hassle as they were always out on the streets getting up to no good and that this was the reason of why they started to take drugs and create such groups like the Mods and Rockers because they weren't given the guidance of their parents. ...read more.

In addition, women gaining equal rights and being illegible to divorce is also a great change as women and girls wouldn't have been allowed to gain an education and if divorce wasn't aloud, many families and children would be unhappy and mentally depressed. In conclusion we can say that traditionalists were the base of our society, which could be described as the frame of moral, which gave more control over individuals. As people began to rebel against the traditional ideas the base of the old frame had cracked (which some people described as the break down of society) and the moral started to change (law and establishment). Through diversity and technology people became more knowledgeable and independent which can be argued from both groups' view (traditionalists and liberals) however the consequences of the changes that took place in the 1960s gave freedom, space and independence to people. On the other hand, it also caused conflict, violence and broken families. Overall, this can highlight that some people preferred to stay glued to the traditional ways of living (traditionalists) as they were frightened of consequences of change such as violence and broken families, however it can be argued that there was always conflict, violence and broken families through all decades but the independency and women's right wasn't. Thus others were ready for change and to break away from a fixed routine as they were fond of the idea of independence, freedom and becoming individual(liberals). ...read more.