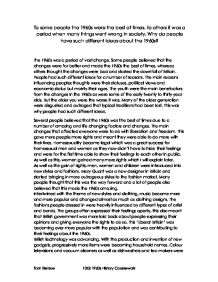 To some people the 1960s were the best of times, to others it was a period when many things went wrong in society. Why do people have such different ideas about the 1960s?

To some people the 1960s were the best of times, to others it was a period when many things went wrong in society. Why do people have such different ideas about the 1960s? The 1960s was a period of vast change. Some people believed that the changes were for better and made the 1960s the best of times, whereas others thought the changes were bad and started the downfall of Britain. People had such different ideas for a number of reasons. The main reasons influencing peoples thoughts were their statuses, political views and economic status but mainly their ages. The youth were the main benefactors from the changes in the 1960s as were some of the early twenty to thirty year olds. But the older you were the worse it was. Many of the older generation were disgusted and outraged that typical traditions had been lost. This was why people had such different ideas. Several people believed that the 1960s was the best of times due to a number of amazing and life changing factors and changes. The main changes that affected everyone were to do with liberation and freedom. ...read more.

This split up families and friends and was a real downfall to the 1960s. This also made people in Britain think about how their lives would be affected by the crisis and also stirred up a lot of anger toward the German government. Throughout the 1960s there were also several crises in America. Two of America's greatest men and influencers were assassinated. John F Kennedy, US President, was assassinated whilst in the back of an open top car. Also, Martin Luther-King was assassinated while in the hotel he was staying at while representing AFSCME. These two horrors made the nation fall silent and thousands of people were devastated that people could do such things. This was, to some people, where things started to go wrong. As well as the assassinations, America was heavily involved in the Vietnam Conflict (or second Indochina war). This meant the loss of many US troops and thousands of dollars being spent on the war. This meant that people were angry that men were lost and they were annoyed that so much money was spent on the war. Another crisis the Americans were strongly involved in was the Cuban Missile Crisis during the cold war. ...read more.

But even worse was that there were disastrous side effects. Weight loss, depression and nausea were common side effects that were not very nice. Another product that had nasty side effects was Cannabis, a recreational drug. Cannabis was not the only recreational drug to take Britain by storm, but it was probably the most common. Cannabis relaxed the smokers and left them feeling chilled out. It also showed a sense of liberty in letting people do what they wanted. But it also had some terrible side effects. Cannabis was, and still is, linked to depression, psychosis and bronchitis. Many people in the 1960s experienced this, but others didn't. This made it such a two sided drug and two sided argument. In conclusion, there were many factors that made people decide how they felt the 1960s were. I personally think that the 1960s wasn't a lot different to life today. There is a lot of freedom, Britain is very liberal, the youth have money and new technology is being developed everyday. As well as all of the good things there are still wars, murders, drugs and a lot of poverty. Because of this I think that the 1960s in some ways was fantastic but was also a period where things started to go wrong. ?? ?? ?? ?? Tom Bletsoe 10Gi 1960s History Coursework ...read more.